Descent Into Hell: Civilian Memories of the Battle of Okinawa (Paperback) 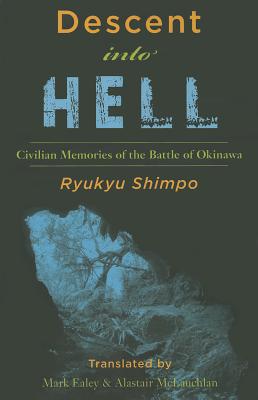 Descent Into Hell: Civilian Memories of the Battle of Okinawa (Paperback)

Concerned about the need to record and explain the experiences of Okinawans caught up in the Battle of Okinawa, in 1983 the local Ryukyu Shimpo newspaper carried out several hundred interviews with survivors. With explanatory comment added, this was published first in serial form, then later as a book. More often than not talking in detail about their experiences and visiting the caves and shelters where they spent weeks on end as the U.S. bombardment destroyed everything above ground was a cathartic experience for those who came forward to tell their stories.

The Battle of Okinawa affected every resident in some way. Ten of thousands of Okinawans were killed in the relentless bombardment by U.S. forces, ten of thousands more local recruits died in Home Guard units, thousands died of starvation and malaria in places away from the fighting, hundreds of young students died in the Blood and Iron Student Corps or as nurse's aides tending to wounded soldiers in hospital caves, and hundreds of evacuees lost their lives in ships sunk by American submarines or aircraft. There were even people who took their own lives, or the lives of loved ones, to avoid what they had been told by the Japanese Army would be a far worse fate at the hands of their American captors. Descent into Hell is the story of this apocalyptic struggle as told by those Okinawans who survived.