Dr. Mary's Monkey: How the Unsolved Murder of a Doctor, a Secret Laboratory in New Orleans and Cancer-Causing Monkey Viruses Are Linked to Lee Harvey Oswald, the JFK Assassination and Emerging Global Epidemics (Hardcover) 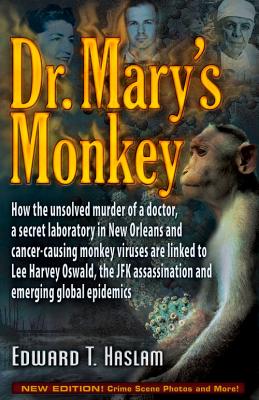 Dr. Mary's Monkey: How the Unsolved Murder of a Doctor, a Secret Laboratory in New Orleans and Cancer-Causing Monkey Viruses Are Linked to Lee Harvey Oswald, the JFK Assassination and Emerging Global Epidemics (Hardcover)


Not On Our Shelves—Ships in 1-5 Days
This new updated edition is not only hard cover for long life, but it contains an additional 25 pages of revelations from the author including documents from the FBI, CIA, CDC, and NOPD, plus the actual crime scene photos of the Mary Sherman murder. You’ll see why we say this is the “Hottest cold case in America.” The 1964 murder of a nationally known cancer researcher sets the stage for this gripping exposé of medical professionals enmeshed in covert government operations over the course of three decades. Following a trail of police records, FBI files, cancer statistics, and medical journals, this revealing book presents evidence of a web of medical secret-keeping that began with the handling of evidence in the JFK assassination and continued apace, sweeping doctors into cover-ups of cancer outbreaks, contaminated polio vaccine, the arrival of the AIDS virus, and biological weapon research using infected monkeys.

Edward T. Haslam is a former advertising music director and writer. Jim Marrs is the author of Alien Agenda, Crossfire (which was consulted by Oliver Stone during the making of the movie JFK), and Rule by Secrecy. He is a member of the Society of Professional Journalists and Investigative Reporters & Editors and is a former president of the Press Club of Fort Worth. He lives in Fort Worth, Texas.

"I personally appreciate his efforts in giving us a better sense of the importance of New Orleans into national events, thru his telling of his own personal experiences." —John Delane Williams, professor emeritus, Research Methodologies, the University of North Dakota

“I was fascinated by the complex scenario of Dr. Mary’s Monkey. Murder, forensic science, and high level politics are artfully intertwined and skillfully presented in this intellectually challenging and enjoyable book by Edward Haslam.” —Cyril H. Wecht, M.D., J.D., author, Into Evidence: Truth, Lies and Unresolved Mysteries in the Murder of JFK

"Ed Haslam, in his ground-breaking research into the death of Doctor Mary Sherman in 1964, has uncovered an entirely new aspect of the assassination of President Kennedy - the secret involvement of Lee Harvey Oswald in an illegal, unethical, and extremely dangerous laboratory intent on developing carcinogenic viruses to kill Fidel Castro." —James Stewart Campbell, M.D., Country Doctor Clinic, Seattle, WA