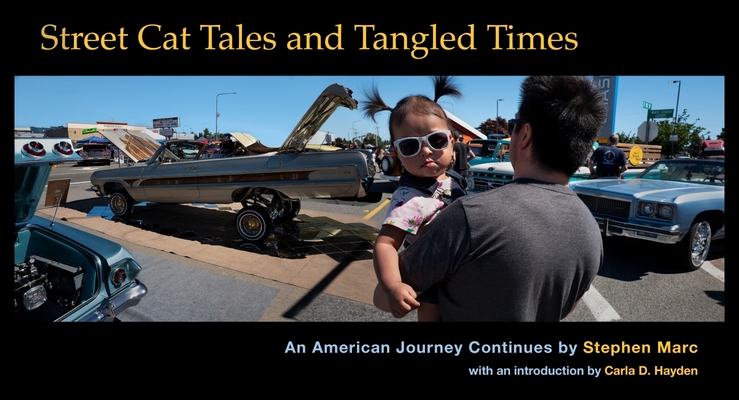 
Coming Soon—Pre-Order Now
In his award-winning book, American / True Colors, Stephen Marc presents one of the most comprehensive photographic surveys ever conducted about America and Americans. For his efforts--the survey includes both the Obama and Trump presidencies--for his artistry, and for his unique African-American perspective, the Independent Publishers Book Awards gave American / True Colors its 2021 Gold Medal for the Best Book of the Year in Photography.

But Stephen Marc was not finished with telling the American story. In Street Cat Tales and Tangled Times, the artist takes us on another sweeping journey, coast to coast, this time straddling before and during the COVID years when America and Americans were confronted by a multitude of unprecedented challenges that affected citizens in every aspect of life no matter where they might live.

Introduced by Dr. Carla D. Hayden, 14th Librarian of Congress and the first woman and first African American to hold that distinguished post since its founding in 1802, and featuring 210 new photographs by Stephen Marc, including 85 captivating digital montages, Street Cat Tales and Tangled Times offers a creative and highly insightful look at how Americans have been living their life on the streets during this time of COVID and controversial Supreme Court rulings and the severe impacts of climate change, social injustice, mass shootings and gun violence, inflation, intense political division, the Big Lie, the January 6 insurrection, Russia's invasion of Ukraine, and so much more.

As was the case with American / True Colors, in Street Cat Tales and Tangled Times we see how the American journey continues. How in our ongoing search for a more perfect Union we need to recognize and respect more fully the personal histories that brought us here and the truths we need to face. How in the process of moving forward toward an uncertain future we embrace the joy of living and learn to grow and heal as families, communities, and a nation.