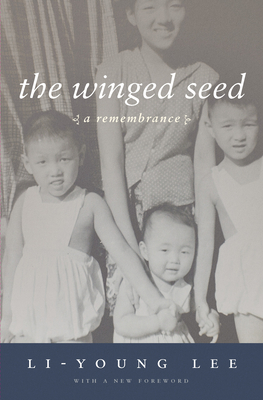 It has true spiritual importance for contemporary American literature.--Edward Hirsch

Upon its initial publication, acclaimed poet Li-Young Lee's memoir The Winged Seed: A Remembrance (1995), received an American Book Award from the Before Columbus Foundation. In lyrical prose, Lee's extraordinary story begins in the 1950s when his parents fled China's political turmoil for Indonesia. Along with many other Chinese members of the population, his family was persecuted under President Sukarno. Falsely accused and charged for crimes against the state, his father spent a year and a half in jail as a political prisoner, half of that time in a leper colony. While his entire family was being transported to a prison colony, they escaped and fled to Hong Kong, Japan, Malaysia, and back to Hong Kong where his father rose to prominence as an evangelical preacher. Eventually, the family sought asylum in the United States in 1962. When the author was six, they emigrated to a small town in western Pennsylvania where his father became a Presbyterian minister. This reissued edition contains a new foreword by the author and never-before-seen photos of the family from different stages of their journey.

Li-Young Lee is the author of four critically acclaimed books of poetry that have garnered such awards as the Delmore Schwartz Memorial Award from New York University; the 1990 Lamont Poetry Selection; the Writer's Award from the Mrs. Giles Whiting Foundation; and fellowships from the National Endowment for the Arts, The Lannan Foundation, and the John Simon Guggenheim Memorial Foundation.

Li-Young Lee is the author of four critically acclaimed books of poetry, his most recent being Behind My Eyes (W.W. Norton, 2008). His earlier collections are Book of My Nights (BOA Editions, 2001); Rose (BOA, 1986), winner of the Delmore Schwartz Memorial Award from New York University; The City in Which I Love You (BOA, 1991), the 1990 Lamont Poetry Selection; and a memoir entitled The Winged Seed: A Remembrance (Simon and Schuster, 1995), which received an American Book Award from the Before Columbus Foundation. Lee's honors include fellowships from the National Endowment for the Arts, The Lannan Foundation, and the John Simon Guggenheim Memorial Foundation, as well as grants from the Illinois Arts Council, the Commonwealth of Pennsylvania, and the Pennsylvania Council on the Arts. In 1988 he received the Writer's Award from the Mrs. Giles Whiting Foundation. He is also featured in Katja Esson's documentary, Poetry of Resilience. Born in 1957 of Chinese parents in Jakarta, Indonesia, Lee learned early about loss and exile. His great grandfather was China's first republican President; and his father, a deeply religious Christian, was physician to Communist leader Mao Tse-Tung. After the establishment of the People's Republic of China in 1949, Lee's parents escaped to Indonesia. In 1959, his father, after spending a year as a political prisoner in President Sukarno's jails, fled Indonesia with his family to escape anti-Chinese sentiment. After a five-year trek through Hong Kong, Macau, and Japan, they settled in the United States in 1964. Through the observation and translation of often unassuming and silent moments, the poetry of Li-Young Lee gives clear voice to the solemn and extraordinary beauty found within humanity. By employing hauntingly lyrical skill and astute poetic awareness, Lee allows silence, sound, form, and spirit to emerge brilliantly onto the page. His poetry reveals a dialogue between the eternal and the temporal, and accentuates the joys and sorrows of family, home, loss, exile, and love. In "The City In Which I love You," the central long poem in his second collection, Li-Young Lee asks, "Is prayer, then, the proper attitude / for the mind that longs to be freely blown, / but which gets snagged on the barb / called world, that / tooth-ache, the actual?" Anyone who has seen him read will add that Lee is also one of the finest poetry readers alive. He lives in Chicago with his wife Donna and their two sons.