A Trojan Feast: The Food and Drink Offerings of Aliens, Faeries, and Sasquatch (Paperback) 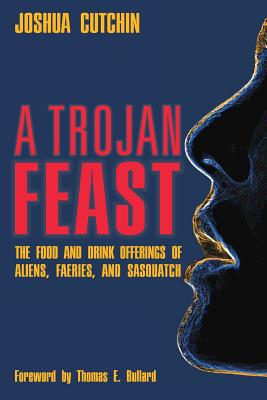 A Trojan Feast: The Food and Drink Offerings of Aliens, Faeries, and Sasquatch (Paperback)


Not On Our Shelves—Ships in 1-5 Days
(This book cannot be returned.)
YOU'VE BEEN WARNED

Accept food from faeries, and you'll never escape their realm, according to European folklore. Accept food from Sasquatch and you will forever be trapped in the spirit world, according to indigenous North American tales. And today, abductees-at least those who have returned-often report being offered strange beverages from their captors. Are these similarities mere coincidence, or is something more at play?

In this outstanding example of scholarship on the unknown, Joshua Cutchin has created the world's first survey and analysis of the food and drink offered by aliens, faeries, and Sasquatch. The offerings are often not what they appear to be: some liquids have healing or aphrodisiac qualities, some foods expand awareness, and there are ointments that reveal an invisible world.

Through his playful explorations of every possibility-from the outer regions of space to the inner sanctum of the human mind-A TROJAN FEAST offers new insight into our relationship with these strange creatures of the outer edge.

"The humble subject of food in anomalistic accounts serves, in Cutchin's measured, learned, and lucid argument, as proof that high strangeness events may be uncertain and discordant, but not incomprehensible." - Thomas E. Bullard, folklorist (ret.), Indiana University, Bloomington

"Joshua Cutchin has brought together a contemplative and truly unique folkloric analysis of the way that food and drink fits into the broader narrative of purported strange phenomena. In doing so, Cutchin provides, in the very truest sense, 'food for thought.'" - Micah Hanks, author of "Magic, Mysticism and the Molecule"

JOSHUA CUTCHIN is a native of North Carolina with a long interest in forteana. He holds a Masters in Music Literature and a Masters in Journalism from the University of Georgia, and currently works as a public affairs specialist in the southeast. In addition to his media work, Cutchin is also a published composer and maintains an active performing schedule as a jazz and rock tuba player, having appeared on eight albums and live concert DVDs. A TROJAN FEAST is his first book.