Imhotep the African: Architect of the Cosmos (Paperback) 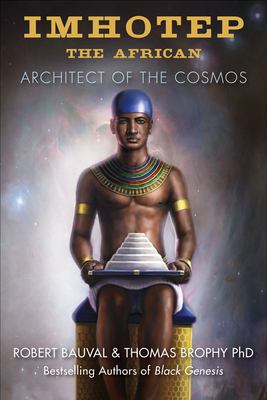 Imhotep the African: Architect of the Cosmos (Paperback)

An Exploration of Imhotep—Architect of the Step Pyramid at Saqqara, High Priest of Ra, and Royal Astronomer—as Well as His Influence as the True Father of African Civilization.

In this groundbreaking book, Egyptologist Robert Bauval and astrophysicist Thomas Brophy uncover the mystery of Imhotep, an ancient Egyptian superstar, pharaonic Da Vinci, Michelangelo, Galileo, and Newton all rolled into one. Based on their research at the Step Pyramid Complex at Saqqara, Bauval and Brophy delve into observational astronomy to "decode" the alignments and other design features of the Step Pyramid Complex, to uncover the true origins and genius of Imhotep. Like a whodunit detective story they follow the clues that take them on an exhilarating magical mystery tour starting at Saqqara, leading them to temples in Upper Egypt and to the stones of Nabta Playa and the black African stargazers who placed them there.

Imhotep the African describes how Imhotep was the ancient link to the birth of modern civilization, restoring him to his proper place at the center of the birthing of Egyptian, and world, civilization.

Born in Egypt and having lived there and elsewhere in the Middle East for much of his life, Robert Bauval has published several papers linking the pyramids with astronomy, and his findings have been presented at the British Museum. He has also written three books with bestselling author Graham Hancock (Message of the Sphinx, Talisman, and The Mars Mystery).

Thomas Brophy has a Ph.D. in physics from the University of Colorado, was a staff research scientist at the Laboratory for Atmospheric and Space Physics, Boulder. He lives in Encinitas, CA.
"Imhotep the African is an archaeological l detective story. Bauval and Brophy make the case that the legendary Egyptian physician, architect, and astronomer Imhotep was not only an historical figure but that he was black. This remarkable book challenges many assumptions about life along the Nile, revealing a worldview and technology that was more sophisticated than anything previously imagined." --Stanley Krippner, PhD, co-author of Personal Mythology
— Reviews

"Bauval and Brophy have once again brought their keen intellectual and scientific skills to bear by examining an aspect of ancient history that contemporary Egyptologists have been either too afraid or too unwilling to investigate. Imhotep the African is the perfect sequel to Black Genesis, for it presents incontrovertible truths that will either be accepted on their merits or ignored for fear of exposing a house of lies built upon foundations of historical falsehoods. It is evident to many of their colleagues that Robert Bauval and Thomas Brophy are the dynamic duo of independent Egyptologists. They are to be commended for their scholarship and their dogged determination to present an honest assessment of historical events--even if it flies in the face of conventional dogma." --Anthony T. Browder, author and independent Egyptologist
— Reviews