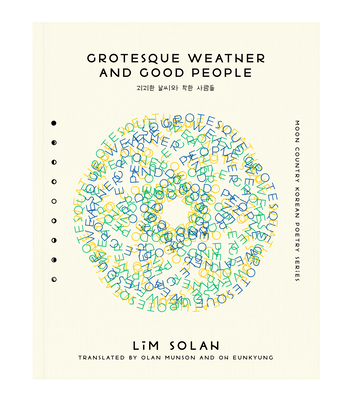 
In Stock—Click for Locations
A debut English translation of contemporary free verse poetry by an award-winning South Korean poet and novelist.

By turns humorous and dark, these poems explore the simultaneous intimacy and alienation of everyday life in urban Seoul. Writing in a simple vernacular, Lim Solah's lyric I struggles with the poet's call to "wonder" in a world lurking with quiet dissonance and horror.
Many of these poems incorporate elements of drama and fiction, including documentary, collapsing the boundaries between the imaginary and the real as they explore the writer's relationship with multitudinous versions of her many selves.

While BTS light up the charts and Korean films gather international awards, Lim's poems paint a strange and disorienting map of the consciousness of the so-called "spec" generation that calls their country Hell Chosun. This is a voice on fire from a world on fire. Readers from Seoul to Seattle to Slovenia to Singapore will find it familiar. Since that world is also the one in which we all live.

Curated by Jake Levine, the Moon Country Korean Poetry Series publishes new English translations of contemporary Korean poetry by both mid-career and up-and-coming poets who debuted after the IMF crisis. By introducing work that comes out of our shared milieu, this series not only aims to widen the field of contemporary Korean poetry available in English translation, but also to challenge orientalist, neo-colonial, and national literature discourses. Our hope is that readers will inhabit these books as bodies of experience rather than view them as objects of knowledge, that they will allow themselves to be altered by them, and emerge from the page with eyes that seem to see "a world that belongs to another star."

Lim Solah lives in South Korea. She is the author of the novel The Best Life. the poetry collection Get Packing, and the short story collection Snow, Person and Snowperson. She is the recipient of numerous awards such as the JoongAng New Writer's Award for Poetry, Sin Dong-yup Prize for Literature, and the Moonji Literary Award as well as the Arts Council Korea's Young Art Frontier Grant in 2014.