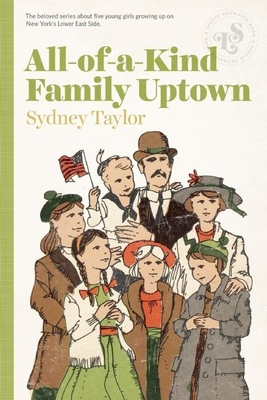 
On Our Shelves Now at:
Your favorite All-of-a-Kind Family has a new home in the Bronx, new friends and neighbors, and best all, new adventures. In the third book in the beloved series about a Jewish family growing up in early twentieth century New York, Ella misses her boyfriend Jules, who has joined the Army to fight in World War I, Henny spills tea on a dress she borrowed without asking, Sarah works to win a prize at school, Charlotte takes the elevated train without paying her fare, Gertie makes a pancake, and little Charlie is terrified when he meets Santa Claus. In true All-Of-A-Kind Family spirit, everyone must come together to keep the house running smoothly when Mama goes into the hospital to have her appendix removed.

Born in 1904 on New York's Lower East Side, Sydney Taylor was one of the first authors of children's books centered on Jewish characters. She didn't begin writing until she married and had a daughter, to whom she told bedtime stories about growing up with five sisters. She wrote a manuscript and put it in a drawer, and it wasn't until her husband secretly submitted it to Charles A. Follet Award for Writing that Taylor's bedtime stories became the immensely popular All-of-a-Kind Family series. Taylor died in 1978 at the age of seventy-three. The Sydney Taylor Book Award is given each year by the Jewish Association of Libraries to a book for young people that authentically portrays the Jewish experience.