A Change of Time (Paperback) 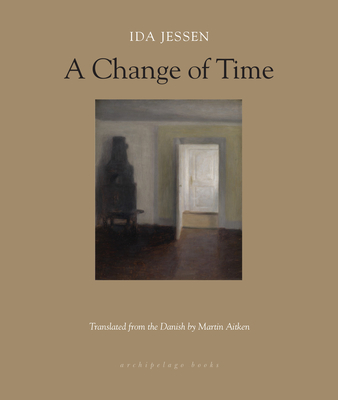 A Change of Time (Paperback)


Special Order—Subject to Availability
A penetrating study of a woman who, in the wake of her domineering husband's death, must embrace her newfound freedom and redefine herself.

Set in rural Denmark in the early 20th century, A Change of Time tells the story of a schoolteacher whose husband, the town doctor, has passed away. Her subsequent diary entries form an intimate portrait of a woman rebuilding her identity, and a small rural town whose path to modernity echoes her own path to joyful independence.
Ida Jessen is the author of A Change of Time (En Ny Tid), which received the Blixen Prize and Danish Radio's Best Novel Prize, as well as several bestselling and award-winning novels. A member of the Danish Academy, she is known as a master of psychological realism. She has also translated the work of Marilynne Robinson and Alice Munro into Danish.

About the translator: Martin Aitken is the acclaimed translator of numerous novels from Danish and Norwegian, including works by Karl Ove Knausgaard, Hanne Ørstavik, Peter Høeg, Jussi Adler-Olsen, and Pia Juul, and his translations of short stories and poetry have appeared in many literary journals and magazines. In 2012 he was awarded the American-Scandinavian Foundation's Nadia Christensen Translation Prize.
“Jessen is a talented and empathetic writer (and kudos must be given to translator Aitken, whose translation is supple and luminous), and has imbued a quiet story about a woman finding herself after her husband’s death with poignancy and stunning humanity.” - Publishers Weekly (starred review)

"In A Change of Time, Ida Jessen has crafted a masterpiece of the epistolary novel told in diary entries. Each log is rich with detail ... Here, one-liners—beautifully translated from the Danish by Martin Aitken—are deeply felt." — Bookforum

"The text shines as an honest reckoning with the death of a spouse—but one in a deeply companionless marriage—and the life of two people who shared little but space ... Jessen, the Danish translator of Marilynne Robinson, among others, proves to have a keen Robinsonian streak of her own. She writes with the same narrative generosity, the same belief in the dignity and voice of characters that might usually be dismissed." — The Millions

"A Change of Time is a book of masterful restraint, and this restraint is a kind of tenderness. It is a book that understands that desire permeates everything - nothing human can be be cleansed of it; and that sometimes love clings most inextricably to the smallest places - misjudgment, invisibility, loneliness. It is a book that deepens and dignifies both our innocence and our fallibility." — Anne Michaels, author of Fugitive Pieces

"A masterful psychological portrait of an individual, who is set free into a new era, after many years of great loneliness." -- Jury of the Danish Writers Association's Blixen Award for A Change of Time

"A successful portrait of a widow and her coming freedom. Ida Jessen is sensible and solid in her historical novel A Change in Time." -- Mikkel Krause Frantzen, Politiken

"One rejoices at how clearly and precisely the book is written." -- Dagbladet Information

"Once again, Ida Jessen has succeeded in creating a small masterpiece." -- Weekendavisen

"Set in a rural Danish village in the early 20th century, A Change of Time is a beautiful, quiet and reflective novel told through the diary entries of a schoolteacher called Frau Bagge . . . The novel charts her response to [her husband's] death and her attempts to build herself a new life, find herself a new place and identity and discover meaning in life again. An exquisitely written novel." – Radz Pandit, Rhadika's Reading Retreat