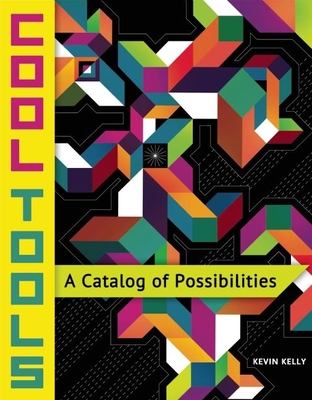 
Special Order—Subject to Availability
Cool Tools is a highly curated selection of the best tools available for individuals and small groups. Tools include hand tools, maps, how-to books, vehicles, software, specialized devices, gizmos, websites -- and anything useful. Tools are selected and presented in the book if they are the best of kind, the cheapest, or the only thing available that will do the job. This is an oversized book which reviews over 1,500 different tools, explaining why each one is great, and what its benefits are. Indirectly the book illuminates the possibilities contained in such tools and the whole catalog serves an education outside the classroom. The content in this book was derived from ten years of user reviews published at the Cool Tools website, cool-tools.org.
Kevin Kelly is Senior Maverick at Wired magazine. He co-founded Wired in 1993, and served as its Executive Editor from its inception until 1999. He is editor and publisher of the Cool Tools website, which gets half a million unique visitors per month. From 1984-1990 Kelly was publisher and editor of the Whole Earth Review, a journal of unorthodox technical news. He co-founded the ongoing Hackers' Conference, and was involved with the launch of the WELL, a pioneering online service started in 1985. His last book, What Technology Wants (Viking/Penguin October 18, 2010), asserted that technology as a whole is not just a jumble of wires and metal but a living, evolving organism that has its own unconscious needs and tendencies. He also authored the best-selling New Rules for the New Economy and the classic book on decentralized emergent systems, Out of Control. Kevin Kelly's website is kk.org.