My Old Lady: Complete Stage Play and Screenplay with an Essay on Adaptation (Paperback) 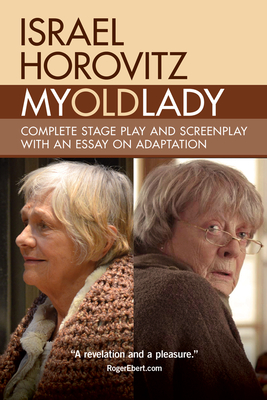 My Old Lady: Complete Stage Play and Screenplay with an Essay on Adaptation (Paperback)


Not On Our Shelves—Ships in 1-5 Days
Famed playwright Israel Horovitz has written more than 70 produced plays, which have been translated in more than 30 languages worldwide. Along the way, he has also written screenplays for film including Author Author , starring Al Pacino, as well as the award-winning Sunshine, James Dean, and The Strawberry Statement. At the age of 75, he directed an adaptation of his play My Old Lady, starring Kevin Kline, Maggie Smith, and Kristin Scott Thomas. Now he shares tips and techniques on adapting plays for the screen. The book includes the full script of both the play version and screenplay of My Old Lady, along with an in-depth analysis by Horovitz of the challenges of adapting the written language of a play to the visual language of the screen. He discusses what inspired him to consider adapting the play in the first place, and his diligent efforts to distill the spoken language of the play into the visual language of film. In discussing his adaptation process, Horovitz also reveals his brilliant insights into the creative process itself, as well as how to keep inspired during the course of a lengthy writing career.
Playwright-screenwriter-director Israel Horovitz's 70+ stage-plays have been translated and performed in as many as 30 languages, worldwide. His plays have introduced such actors as Al Pacino, John Cazale, Jill Clayburgh, Gerard Depardieu, and many others. Horovitz wrote and directed his first feature film (at age 74) based upon his stage-play My Old Lady, starring Maggie Smith, Kevin Kline, and Kristin Scott Thomas. Horovitz's memoires Un New-Yorkais a Paris were recently published in France, where he is the most-produced American playwright in French theatre history. He has written and published one novel Cappella and one novella Nobody Love Me. Awards include OBIE (twice), Prix Italia, Sony Radio Academy Award, Writers Guild of Canada Best Screenwriter Award, Christopher Award, Drama Desk Award, Award in Literature of the American Academy of Arts and Letters, Lifetime Achievement Award from B'Nai B'rith, Boston Public Library's Literary Lights Award, Massachusetts Governor's Award, and many others. In addition, in 2014, at age 75, Horovitz saw his first poetry collection, Heaven and Other Poems, published by Three Rooms Press. Horovitz was recently decorated as Commandeur dans l'Ordre des Arts et des Lettres, France's highest honor awarded to foreign artists. He is Founding Artistic Director of Gloucester Stage, and active Artistic Director of the New York Playwrights Lab, and is co-artistic director of Compagnia Horovitz-Paciotto in Italy. NYC's Barefoot Theatre celebrated Horovitz's 70th birthday by organizing The 70/70 Horovitz Project, a year-long event with 70 Horovitz plays having had readings and/or productions by theatres around the globe. He is the father of five children: film producer Rachael Horovitz, TV producer/novelist Matthew Horovitz, Beastie Boy/composer Adam Horovitz, writer/filmmaker Oliver Horovitz, and academic Hannah Horovitz. He is married to Gillian Horovitz, formerly England National Marathon Champion and record-holder. The Horovitz family divides its time among homes in NYC, Gloucester, Massachusetts, and London.