Where We Lived: Essays on Places (Paperback) 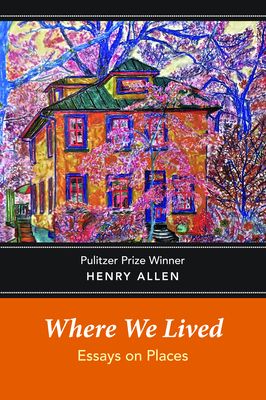 Where We Lived: Essays on Places (Paperback)

"Henry Allen is the truest chronicler of our American dream. By taking us into the homes of his history, he reveals our own lives in shafts of sunlit prose streaming through the windows of time and place."--James Grady, author of Six Days of the Condor

"I loved the book."--Ann Beattie, author of Mrs. Nixon: A Novelist Imagines a Life and The State We're In: Maine Stories

"Henry Allen, one of the best deadline essayists in the business."--Christopher Buckley, author of Thank You for Smoking

Pulitzer Prize-winner Henry Allen brings alive nearly five centuries of family by describing places where they lived--from plantations in South Carolina and Guadeloupe to a boarding house in Queens; a sadly grand old house in Orange, New Jersey; farmhouses, mansions, apartments, ships, tents, and dormitories; towns in Rhode Island and Connecticut. He vividly describes his family's historical journey through Indian wars, a witchcraft trial, privateering, wagon trains, a split over slave trading, the friendship of presidents, the dwindling of the old Anglo-Saxon hegemony, and the heartless mysteries of money, alcohol, and gentility.

I feared my children and their children would never know about the lost worlds of our family--love, moral stands, disappointment, Christmas dinners, the ancient and ordinary sunlight that transported us like aliens from galaxies of the past. These galaxies not only existed but persisted despite the apathy of their inheritors. Consider this book a last will and testament, an attempt to stave off the probate of oblivion.

Intense, mercurial, and bearded, Henry Allen is a Marine veteran of Vietnam and was a feature writer and art critic at The Washington Post from 1970 to 2009. His books include Going Too Far Enough: American Culture at Century's End, What It Felt Like: Living in the American Century, Fool's Mercy, and The Museum of Light Air.

Intense. Mercurial. Bald. Bearded. Marine veteran of Vietnam. Feature writer and art critic at The Washington Post, 1970-2009 - awarded first prize for commentary by the American Society of Newspaper Editors (1992) and the Pulitzer Prize for criticism (2000). Among his books: Going Too Far Enough: American Culture at Century's End (Smithsonian Institution Press), What It Felt Like: Living in the American Century (Pantheon), Fool's Mercy: a novel (Houghton-Mifflin), and The Museum of Lost Air, poetry (Dryad Press). Allen has written for the New York Review of Books, New Yorker, Paris Review, Vogue, Wilson Quarterly and currently reviews books for The Wall Street Journal. He has been a guest on radio and television, e.g., Charlie Rose Show, Discovery Channel, NPR's Talk of the Nation, Stephen Colbert and has given talks in venues at Princeton University, University of Michigan (Graham Hovey Lecture), Pennsylvania State University, American University, and F. Scott Fitzgerald Conference.