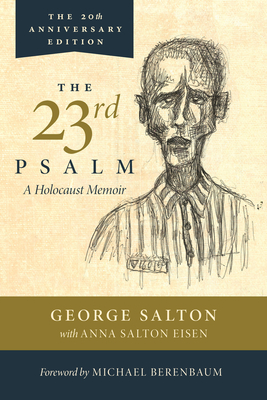 
Coming Soon—Pre-Order Now
Twenty years since its first publication, this new anniversary edition of the Holocaust memoir of George Salton (then Lucjan Salzman), gives readers a personal and powerful account of his survival through one of the darkest periods in human history. With heartbreaking and honest reflection, the author shares a gripping first-person narrative of his transformation from a Jewish eleven-year-old boy living happily in Tyczyn, Poland with his brother and parents, to his experiences as a teenage victim of growing persecution, brutality and imprisonment as the Nazis pursued the Final Solution. The author takes the reader back in time as he reveals in vivid and engrossing details the painful memories of life in his childhood town during Nazi occupation, the forced march before his jeering and cold-eyed former friends and neighbors as they are driven from their homes into the crowded and terrible conditions in the Rzeszow ghetto, and the heart-wrenching memory of his final farewell as he is separated from his parents who would be sent in boxcars to the Belzec extermination camp.Alone at age 14, George begins a three-year horror filled odyssey as part of a Daimler-Benz slave labor group that will take him through ten concentration camps in Poland, Germany, and France. In Plasz w he digs up graves with his bare hands, in Flossenb rg he labors in a stone quarry and in France he works as a prisoner in a secret tunnel the Nazis have converted into an armaments factory. In every concentration camp including Sachsenhausen, Braunschweig, Ravensbr ck and others, George recounts the agonizing and excruciating details of what it was like to barely survive the rollcalls, selections, beatings, hunger, and despair he both endured and witnessed. Of the 465 Jewish prisoners with him in the labor group in the Rzesz w ghetto in 1942, less than fifty were alive three years later when the U.S. Army 82nd Airborne Division liberated the Wobbelin concentration camp on the afternoon of May 2, 1945. George recalls not only the painful details of his survival, but also the tales of his fellow prisoners, a small group who became more than friends as they shared their meager rations, their fragile strength, and their waning hope. The memoir moves us as we behold the life sustaining powers of friendship among this band of young prisoners. With gratitude for his courageous liberators, Salton expresses his powerful emotions as he acknowledges his miraculous freedom: "I felt something stir deep within my soul. It was my true self, the one who had stayed deep within and had not forgotten how to love and how to cry, the one who had chosen life and was still standing when the last roll call ended."
George Salton survived ten Nazi concentration camps and after living in Displaced Person Camps in Germany for two years, he emigrated to the United States in 1947 where he changed his name to George Salton and forged a new life. He proudly served in the U.S. Army and became an American citizen. He met the love of his life, Ruth, also a Holocaust survivor. They married and raised three children, Henry, Alan, and Anna. Using the GI Bill, Salton attended college classes at night where he earned a bachelor's degree in physics and a master's degree in electrical engineering from Syracuse University. George Salton had a distinguished career with the Department of Defense eventually becoming Director of Defense Communications at the Pentagon. After 35 years of government service, George became an executive in the aerospace industry. In 1998, George traveled with his family to Poland to share his Holocaust story and to grieve his beloved parents at the Belzec camp where they had been murdered. In 2002 George and his daughter, Anna, co-wrote his bestselling memoir, The 23rd Psalm. He spent many years speaking and sharing his story and teaching the lessons of the Holocaust which are becoming ever more critical to humanity. He died after a sudden illness at the age of 88 on March 13, 2016.Anna Salton Eisen grew up in a home where her parents' Holocaust experiences were a well-kept secret. She later moved to Texas where she became active in the Jewish community as a founding member of the first synagogue in her area. Serving as a docent for the Dallas Holocaust Museum and an interviewer for the Steven Spielberg's Survivors of the Shoah Visual History Foundation, Salton Eisen continued to search for information about her family's survival and destruction in the Holocaust. In 2001, she co-authored with her father The 23rd Psalm: A Holocaust Memoir. Anna is also author of the forthcoming memoir, Pillar of Salt: A Daughter's Life Growing Up in the Shadow of the Holocaust and the subject of a forthcoming new documentary film about her father's life. This new edition expands this memoir with extensive research into the genealogy of her family and her discovery of many original documents which record her father's concentration camp experience. Salton Eisen and her family reside in Westlake, Texas.Michael Berenbaum is an American scholar, professor, rabbi, writer and filmmaker who specializes in the study of the Holocaust. He served as the Deputy Director of the President's Commission on the Holocaust (1979-1980), the Project Director of the United States Holocaust Memorial Museum--USHMM--between1988 and 1993, and as Director of the USHMM's Holocaust Research Institute (1993-1997). From 1997 to 1999, he served as the president and CEO of the Survivors of the Shoah Visual History Foundation and currently serves as the Director of the Sigi Ziering Institute, Exploring the Ethical and Religious Implications of the Holocaust, located at the American Jewish University in Los Angeles, California. He is the author of over 18 books including the best selling "The World Must Know: The History of theHolocaust as Told in the United States Holocaust Memorial Museum" (2006). He has co=produced and served as an adviser on several documentary films including "One Survivor Remembers: The Gerda Weissman Klein Story" which won an Academy Award, an Emmy Award and the History Channel's "The Holocaust: The Untold History."