The Nameless and The Faceless Women of the Civil War: A Collection of Poems, Essays, and Historical Photos (Paperback) 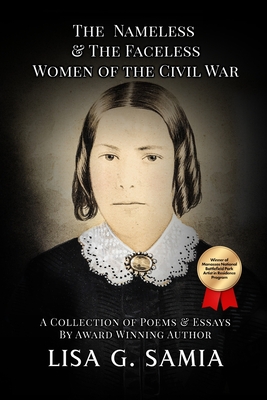 The Nameless and The Faceless Women of the Civil War: A Collection of Poems, Essays, and Historical Photos (Paperback)

For the unknown women who witnessed the Civil War, whose lives and experiences were lost and forgotten in the pages of history. Step back into time and hear the voices of the past come to life. The Nameless and the Faceless Women of the Civil War is a collection of 28 poems and 28 essays, along with historical images and personal photos. Second book in the series.

The very first poem and essay about Elvira Finch Moore, is author's relative from upstate New York. She married John L. Moore in 1853 in Fairfax County, Virginia. Family history suggests she was a traitor, but was she a traitor to the North? The South? We do not know. We have rumors and legends passed down for generations, but no definitive answers. Elvira and the mystery that surrounds her life is the inspiration for this collection.

The Nameless and the Faceless Women of the Civil War is about those unrecognized women of that era. Many are without a name or a face, but here they have a voice. As we know, not everyone who experienced the Civil War made it into the history books. Through the rhyme and narrative of poetry, the author shares their stories, as never before seen or heard.

For example, the narrator in one poem is the voice of a soldier who is writing to his wife. Another features a woman who is nursing an injured soldier. A particularly moving poem gives a voice to an unnamed theatre attendee, a woman who bears witness to the events at Ford's Theater on April 14, 1865. Others are civilians who are telling their story of what it was like to be at Gettysburg listening to President Abraham Lincoln present the Gettysburg Address in November 1863 or witnessing the burning of Richmond, Virginia in April 1865.

Here, we bear witness and recognize women, such as the first Black woman to enlist in the Union Army, who was only able to serve while in disguise as a man. The essays are the factual representations as provided by history, along with author insights. The poems are voices of those who are sharing their stories. While many of the poems are filled with moments of grief and despair, throughout the collection is a subliminal thread of hope. The lines of North and South are blurred in this collection the reason simply being that suffering has no boundaries.