Made in Sweden: How the Swedes Are Not Nearly So Egalitarian, Tolerant, Hospitable or Cozy as They Would Like to (Have You) Think (Hardcover) 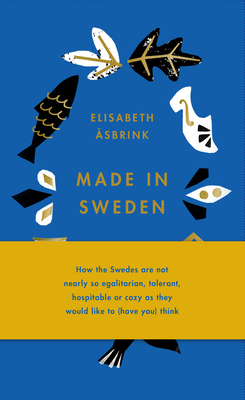 Made in Sweden: How the Swedes Are Not Nearly So Egalitarian, Tolerant, Hospitable or Cozy as They Would Like to (Have You) Think (Hardcover)

In recent times, we have come to favor all things Scandinavian--their food, furnishings, fiction, fashion, and general way of life. We seem to regard the Swedes and their neighbors as altogether more sophisticated, admirable, and evolved than us. But what if Sweden has in fact never been as moderate, egalitarian, dignified, or tolerant as it would like to (have us) think?

The recent rise to political prominence of an openly neo-Nazi party has begun to crack the illusion, and here now is Swede Elisabeth sbrink, who loves her country "but not blindly," presenting twenty-five of her nation's key words and icons afresh. "There is," she writes, "a dark side to Utopia." As she did in her acclaimed 1947, she creates a collage that helps us not only see a more complex and problematic society, but also illustrates how national identity is constructed as much by what (or who) is excluded as what (or who) is included.