Everything I Need to Know I Learned from Betty White: 100 Years of Wisdom from the First Lady of Television (Hardcover) 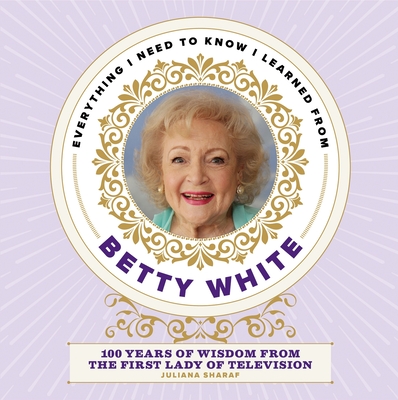 Everything I Need to Know I Learned from Betty White: 100 Years of Wisdom from the First Lady of Television (Hardcover)

Throughout her life, Betty White was a beacon of good humor, straight-talk, kindness, compassion and grit.

With a television career spanning more than 80 years (the longest on record), she was one of America’s most beloved entertainers, best known for her award-winning roles on The Mary Tyler Moore Show, The Golden Girls and Hot in Cleveland. She received eight Emmy Awards, three American Comedy Awards, three Screen Actors Guild Awards, a Grammy Award, and numerous Humanitarian Awards for her work with animals. She was a Television Hall of Fame Inductee as well as a Disney Legend. In 2018, her career was celebrated in a PBS documentary called Betty White: First Lady of Television and in 2019 she joined the cast of Pixar’s Toy Story 4. As she approached her 100th birthday in January 2022, Betty continued to break new ground as an entertainer and grow in popularity.

Those achievements didn’t come easy. In a career that spanned the whole of television history, she’s had to exhibit a special mix of tenacity and kindness to overcome the obstacles in her path. This book helps readers address their own real-life challenges by examining how Betty would have done so with kindness, forthrightness and an abundance of good humor.

With references to her television and film work, as well as her devotion to animal welfare and other humanitarian causes, Everything I Need to Know I Learned from Betty White provides answers to the questions we all face with gentle wisdom and the occasional kick in the pants.

Juliana Sharaf is a writer, editor and Golden Girls enthusiast whose past credits include Everything I Need to Know I Learned from Dolly Parton, John Wayne’s Book of American Grit, Smithsonian Ultimate Puzzle Book and many more. When she isn’t penning or planning special projects for Media Lab Books or having craft cocktails on the lanai with family in Florida, she enjoys baking French desserts, mainlining espresso and binge-watching classic films. She and her husband live in New York City.