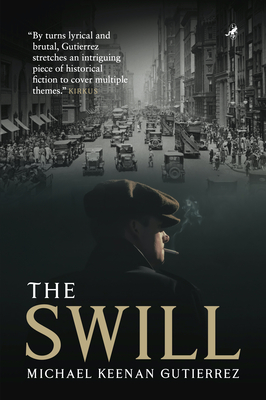 
On Our Shelves Now at:
"I can't resist: The Swill is swell. It reads like the princely offspring of Chandler and Lehane. It's sharp, witty, violent. It's a sort of political/historical thriller, but what made it important to me is that it's really about family, all kinds of family."

- Daniel Wallace, author of Big Fish and This Isn't Going to End Well

Port Kydd, 1929. Joshua Rivers, his pregnant wife Lily, his criminal sister Olive, a geriatric dog Orla, and a cast of ne'er-do-wells eke out life in The Swill, a speakeasy passed down through the Rivers family. Outside, political and race wars rage in The Bonny, the rough Irish neighborhood where they have always lived. But when Olive's in trouble and asks her brother to help her pull a job--one with roots that reach way back into the Rivers family history--who will take the fall? Can The Swill shelter the family, as it always has, or is their luck gone for good?

"The Swill takes the reader on a winding and unpredictable path through history and class where every surface sparkles brilliantly with period detail. Gutierrez twines a half century of skullduggery, of Pinkertons, gangsters, speakeasies, of family, family secrets, and betrayals, into an arresting tale that is brutal, tender, and riveting. He writes unsentimentally, with humor, and with a deep and abiding love for the novel's real subject, which is that of history and how deeply and intimately it connects us and shapes our fates. That is Gutierrez's real genius and what makes this thriller so much more, what makes it so memorable."

- Alexander Parsons, director of creative writing at the University of Houston and author of In the Shadows of the Sun

"Atmospheric and taut, Michael Gutierrez's The Swill is an enthralling, raucous novel about art and history and violence. Imagine a barroom, low lit and pulsing with story, and imagine that story being told by Hemingway, Tarantino and Denis Johnson. That is Michael Gutierrez and his fabulous novel, The Swill."

Originally from Los Angeles, Michael Gutierrez holds an MFA in fiction from the University of New Hampshire and an MA in history from the University of Massachusetts. His work has been published in Scarab, The Pisgah Review, Untoward, The Boiler, Crossborder, and LA Weekly. The Trench Angel was a finalist for the James Jones First Novel Fellowship. He resides with his wife in Chapel Hill, where he teaches in the Department of English and Comparative Literature at the University of North Carolina at Chapel Hill.