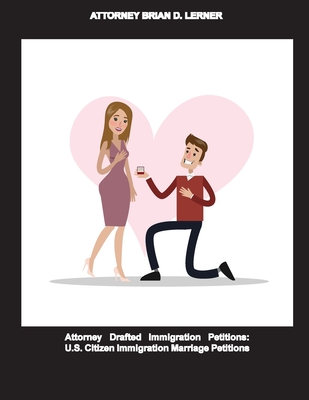 Getting married to a US Citizen or Lawful Permanent Resident? It is not as easy as just showing your marriage certificate. Immigration basically thinks you are lying about the validity of the marriage and are only doing it to get the Green Card. You must show the bona-fides of the marriage and submit sufficient evidence to show why it is a real marriage for love. This sample Marriage Petition is for you. It has everything necessary to give you the best chance possible to get an approval. Just input your own information and use the application as a guide. It has been prepared by an expert Immigration Attorney. Thus, this book will allow you to see a guide of how it is done, prepared and submitted.

Immigration petitions are difficult to get right and to know what to put into each petition. Your thinking of getting this book because you do not have sufficient money to pay an Immigration Law Firm to do it for you. However, this is the next best alternative. As you will note, this Petition is put together by a National Immigration Law Firm that has been in business for nearly three decades. We practice only immigration law and Brian D. Lerner is a Certified Specialist as certified by the State Bar of California. While the actual petition you put together will have different data, at least here you can see what the attorney cover letter looks like and what should be in the petition. You will see the forms necessary to put the petition together and then you will see the various forms of evidence you need in order to support the petition itself. If in the end, you still need help, you can call our office for a consultation.

Many people think that marriage petitions are easy and all they have to do is marry a U.S. Citizen or a Lawful Permanent Resident and they will easily be able to get the Green Card. They do not see the multiple issues which are present and which the immigration officer is looking for when looking at the marriage petition and conducting the immigration interview. First, the immigration officer believes every marriage is fake and that the beneficiary is trying to get married for the sole purpose to get the Green Card. Of course this is illegal and if the officer determines there is marriage fraud, then the beneficiary will not be able to get immigration benefits for life and will likely be placed into deportation proceedings. Even if there is a divorce and later a marriage occurs where there is multiple children, it will not erase the fact that the officer or immigration judge ruled that there was marriage fraud. Clearly, one of the most important factors in submitting the marriage petition is to show that there is a 'bona-fide' marriage. This is much more than simply showing some pictures. Anybody can do that to try to prove the marriage is real. This petition has a typical cover letter to address the issue of the bona-fides of the marriage.

The next big issue which many people fall into is coming here to the United States on a B2 Visitor Visa and then immediately getting married to a U.S. Citizen. If this occurs within the first 90 days of entry, then it is presumed that they committed fraud and did not intend to actually come and visit the U.S. Even if they do this after 90 days, the issue does not just disappear, although it becomes much easier to get over the presumption of fraud. The cover letter here was prepared by a qualified and expert immigration attorney in the U.S. who has been practicing immigration law for nearly 30 years. It is the next best thing to having an attorney do the marriage petition without having to pay an attorney. Take advantage of this petition and show everything you can to try to get approved. Do not get lulled into the false belief that marriage petitions are easy and pose no problems.