The Precarious Walk: Essays from Sand and Sky (Paperback) 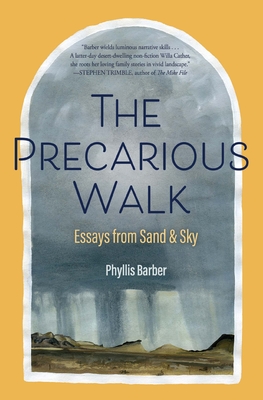 The Precarious Walk: Essays from Sand and Sky (Paperback)


On Our Shelves Now at:
In wide-ranging personal essays at the crossroads of place and perspective, Phyllis Barber challenges and celebrates her Great Basin roots. From a backwoods church in Arkansas to the disappeared town of St. Thomas, buried beneath the waters of Lake Mead, award-winning essayist Phyllis Barber travels roads both internal and external, reflecting upon place and perspective, ambition and loss in The Precarious Walk. As a child growing up in the Mojave Desert, she witnesses the massive power of the Hoover Dam and a fiery rip in the sky from the Nevada Test Site. As an adult, Barber searches for meaning through music, movement, and human connection, examining her Mormon upbringing, the profound ways people and landscape impact one another, and the sudden loss of her first child with open-ended honesty. Barber's distinctly feminine voice expands upon the literature of the West alongside Ellen Meloy and Terry Tempest Williams, with seeking and questioning at the heart of this deeply felt collection. In the spirit of Flannery O'Connor and David James Duncan, Barber adds a deeply generous and--true to her high-desert roots--down-to-earth voice to the illumination of human experience.
Phyllis Barber is an award-winning author of nine books, including The Desert Between Us, Raw Edges, and How I Got Cultured. Winner of the AWP Prize for Creative Nonfiction, she has published essays and short stories in North American Review, Crazyhorse, and Kenyon Review. She has been cited as Notable in The Best American Essays and The Best American Travel Writing. In 2005, Barber was inducted into the Nevada Writers' Hall of Fame. Barber has taught at the Vermont College of Fine Arts and the University of Utah's Osher Institute. She lives in Park City, Utah.