The Backwoods of Everywhere: Words from a Wandering Local (Paperback) 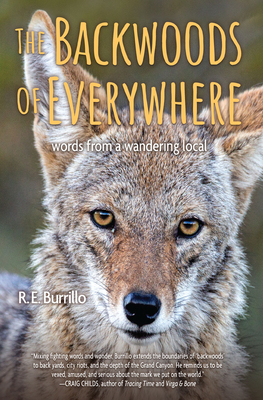 The Backwoods of Everywhere: Words from a Wandering Local (Paperback)


In Stock—Click for Locations
Throughout personal essays spiked with humor and natural science, archaeologist R. E. Burrillo widens his range beyond his popular Behind the Bears Ears. After an upstate New York childhood and a bartending stint in New Orleans' French Quarter, seasonal resort work led R. E. Burrillo to the desert Southwest, whose redrock landscapes were a source of stability through mental and physical illness. In The Backwoods of Everywhere, archaeologist Burrillo excavates his past, examining Indigenous and tourist cultures, the complexities of American archaeology, and what it means to be a local. From the ancient canal systems of Phoenix, Arizona, to the modern Mayan communities of the Yucatan Peninsula, to the depths of the Grand Canyon, Burrillo brings readers on an entertaining romp chock-full of history, ecology, cultural preservation, and personal stories. In the vein of Bill Bryson, Tim Cahill, and Ellen Meloy, Burrillo's is a fresh voice in humor-spiked nature writing and cultural commentary. Running throughout the wide-ranging topics of The Backwoods of Everywhere are themes of place and locality, and how these vary between cultures and individuals. Marrying the intensely personal with the complex and technical, Burrillo's candid voice brings humor, wonder, irony, and wit to each thought-provoking essay.
R. E. Burrillo is an archaeologist and conservation advocate. His book Behind the Bears Ears: Exploring the Cultural and Natural Histories of a Sacred Landscape won the ForeWord INDIES Editor's Choice Prize in Nonfiction. Burrillo's writing has appeared in Archaeology Southwest, Colorado Plateau Advocate, the Salt Lake Tribune, and elsewhere. He currently lives in southern Arizona, where he works as a project manager for PaleoWest.