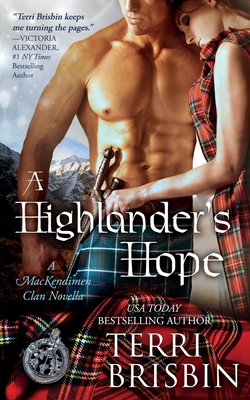 Robena has a place among the inhabitants of Dunnedin, the stronghold of the powerful MacKendimen Clan, and that is as a harlot in their village. Her life is her own and she finds meaning in the pleasure she gives and her work with the midwife and healer. The great wound she'd suffered in her past and the emptiness it caused within her will never be filled, but Robena does not allow that to control her. As the year's end and its festivities and holidays approach, the news that a certain man will spend time here, and time with her, brightens her spirits in ways she cannot explain. And in ways she dares not examine too closely.

Iain MacKillop has led a full life-as the commander of his clan's warriors and uncle to the chieftain, his opinions matter and he protects everyone under his care. As busy as his life is, it is empty, too. Urged to remarry, Iain decides to take a wife, but it's not the one his kith or kin expects even if she is the one he wants. For Iain has fallen in love with the one woman who will not have him-Robena MacKendimen. A Time for Miracles?When Iain visits Dunnedin for the holidays, he begins his fight to prove to Robena that she is the perfect woman to marry him. He expected to face an angry family and shocked friends, but he never expected that Robena would be the biggest obstacle in his quest for their happiness.

Can the magic of Christmas and the Highland tradition of First Footing help them find the love they both deserve and need?

This emotional, sexy historical Highland Christmas novella was previously part of the "Christmas in Kilts" anthology and gives a beloved character her own happy ending and fits between Books 2 - ONCE FORBIDDEN and 3 - A MATTER OF TIME in the MacKendimen Clan series - number 2.5 if vendors permitted it. The MacKendimen Clan series: 1 - A Love Through Time 2 - Once Forbidden 2.5 - A Highlander's Hope novella3 - A Matter of Time