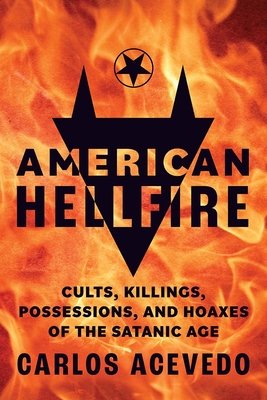 
Not Yet Published—Pre-Order Now
Cannibalism.
Ritual murders. Cults. Blood rites. Possessions. Human trafficking. At a time
when Ronald Reagan promised optimism, America found itself gripped by a
widespread mania: the fear that devil worshippers were rising from a demonic underground
to commit unspeakable acts of violence and mayhem. For more than a decade--from
the early 1980s to the mid-1990s--America suffered through what is now
infamously known as the "Satanic Panic." Primed by the Occult-tinged '60s, when
Anton LaVey founded the Church of Satan, Roman Polanski shocked the public with
Rosemary's Baby, and the Manson Family became shorthand for evil, the
Satanic Panic eventually grew into a national obsession. Across
the country, crimes both real and imagined, ranging from human sacrifices,
multiple murders, and Satanic Ritual Abuse dominated mass media coverage.
Serial killers such as David Berkowitz, "The Son of Sam," who terrorized New
York City in the late 1970s, the "Chicago Ripper" crew, allegedly run by a
flesh-eating devil worshiper and "The Night Stalker," Richard Ramirez, whose
bloodlust seemed unquenchable, fueled fears of a war for the soul of America
against the forces of darkness. In
American Hellfire, Carlos Acevedo traces the roots of Satanic Panic from
its beginnings as a pop-culture phenomenon to the sociological factors that
reached critical mass in the 1980s. Along the way, the notorious crimes
attributed to Satanism--including the daycare hysteria that saw dozens of
innocent people indicted for atrocities they never committed--are revisited, as
well as the hoaxes, tragedies, and conspiracy theories of an era whose
nightmarish anxieties never truly went away.