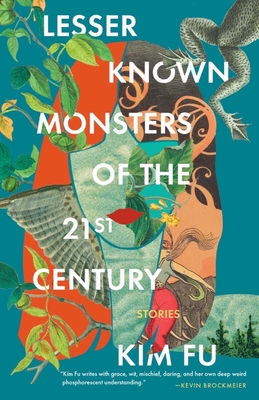 "The strange and wonderful define Kim Fu’s story collection, where the line between fantasy and reality fades in and out, elusive and beckoning." —The New York Times Book Review

In the twelve unforgettable tales of Lesser Known Monsters of the 21st Century, the strange is made familiar and the familiar strange, such that a girl growing wings on her legs feels like an ordinary rite of passage, while a bug-infested house becomes an impossible, Kafkaesque nightmare. Each story builds a new world all its own: a group of children steal a haunted doll; a runaway bride encounters a sea monster; a vendor sells toy boxes that seemingly control the passage of time; an insomniac is seduced by the Sandman. These visions of modern life wrestle with themes of death and technological consequence, guilt and sexuality, and unmask the contradictions that exist within all of us.

Mesmerizing, electric, and wholly original, Kim Fu’s Lesser Known Monsters of the 21st Century blurs the boundaries of the real and fantastic, offering intricate and surprising insights into human nature.

Kim Fu is the author of For Today I Am a Boy which won the Edmund White Award for Debut Fiction and was a finalist for the PEN/Hemingway Award, as well as a New York Times Book Review Editor’s Choice. Her second novel, The Lost Girls of Camp Forevermore, was a finalist for the Washington State Book Award and the OLA Evergreen Award. Fu’s writing has appeared in Granta, the Atlantic, the New York Times, Hazlitt, and the TLS. She lives in Seattle.
The strange and wonderful define Kim Fu’s story collection, where the line between fantasy and reality fades in and out, elusive and beckoning.
— The New York Times Book Review

A lovely, new collection of eclectic tales.
— The Washington Post

There’s something for everyone in this outstanding collection, which cements Fu as one of the most exciting short story writers in contemporary fiction.
— NPR Books

Inventive and mesmerizing. . . . Vivid and surreal, readers of Carmen Maria Machado will enjoy this collection.
— BuzzFeed

The success of Kim Fu’s stories is the element of the unexpected. There are surprises lurking in these narratives, whether it is a quick final plot twist or unexpected peculiarity. . . . Fu is a master of imagery.
— Chicago Review of Books

Stellar. . . . Fu is a master mixer of the speculative, the witchy, and the real.
— Tor.com

A speculative short story collection ideal for streaming audiences accustomed to Black Mirror and The Haunting of Hill House.

What makes these dozen stories really pop are the people around whom they are centered. . . . ultimately it catalogues human nature.
— LitHub

Wonderful. . . . There's nothing to fault in this book; it’s an endlessly entertaining bestiary from one of the country's most exciting practitioners of fiction.
— The Star Tribune

Quite impressive. . . . Feels fresh and new while also having the elements of a mystery you'd find in an Agatha Christie novel.
— LeVar Burton Reads

An incredible collection, one with sweeping variety that is unified by a singular vision of what it means to be human.
— The Rumpus

Stunning. . . . Her stories engage all the senses. . . . A  terrific collection of speculative fiction, with evocative, textured prose that left a lasting impression.
— Locus Magazine

This collection is akin to something out of The Twilight Zone: girls grow wings, sea monsters surface, children’s toys have the power to control time. The oddities to be encountered here will delight and surprise.

Stunning. . . . A must read.
— International Examiner

Each story feels like a potential episode of Black Mirror, exploring futuristic technology and the dangerous hold it has on all of us.

Strange and fantastic. . . . offers commentary on relationships, technology, and what we think we know about one another.
— ALTA

Deft and vivid. . . . Fu paints us pictures of the monsters that loom in the distance of our 21st century lives, at times both abstract and clear as day.
— Porter House Review

Fu boldly carries all that I loved of Bradbury’s fiction—its variety, sensitivity, and immense creative power—into a new era with short stories that captivate and terrify, shock and inspire. Lesser Known Monsters is a uniquely mesmerizing collection.

Fascinating. . . . In the vein of Carmen Maria Machado and Mariana Enríquez, one of Fu’s greatest strengths is her ability to turn horror on its head, focusing less on the terror the modern-day monsters incite, but what they reveal about ourselves.
— The Adroit Journal

A dazzling and surreal collection that grabs you by the throat. . . . Riveting.
— The Orange County Register

Will have you questioning reality and loving every minute of it.
— Ms. Magazine

The best speculative fiction seeks to decenter, decolonize, and disrupt what many have taken for granted as the universe’s natural order. Or at least, that’s what I decided after reading Monsters, because in it, Fu leaps so nimbly from story to story, center to center, taking whatever perspective necessary to take nothing in the multiverse for granted. . . . Fu, who has published two novels and one book of poetry previously, excites me as an emerging speculative fiction author of unique voice and considerable talent.
— South Seattle Emerald

Smart and sharp. . . . a first-rate collection for any fan of speculative fiction. . . . a marvelous collection of work by a writer of tremendous gifts.
— The Maine Edge

Fu’s mastery of clever, strange concepts is undeniable. . . . Tautly controlled language, often to the point of spareness, communicates the lyrical imagination that is the foundation for each piece.
— ZYZZYVA

If you want your fiction as weird as it can get while still being compassionate, resonant, and beautiful, look no further. . . . Super excited about this one.
— Patch

Fu’s stories keep you locked in and riveted. She does the thing great short story writers do, which is to say, she pulls you into the story from the jump and keeps you there. . . . [It's] fabulous, you should read it.
— SFF YEAH!

Delightfully, darkly bizarre. . . . I sped through this collection because it was just too good to put down.
— In Cold Books

The title promises something monstrous and it delivers.
— BookBrowse

This is storytelling at its finest.
— Lightspeed Magazine

Shape-shifting. . . . recreates the shock of feeling in a landscape of disconnection.
— Rain Taxi

Lesser Known Monsters of the 21st Century is one of those rare collections that never suffers from which-one-was-that-again? syndrome. Every story here lights a flame in the memory, shining brighter as time goes by rather than dimming. Kim Fu writes with grace, wit, mischief, daring, and her own deep weird phosphorescent understanding.

How I loved the cool wit of these speculative stories! Filled with wonder and wondering, they’re haunted too by loss and loneliness, their imaginative reach profoundly rooted in the human condition.
— Peter Ho Davies, author of A Lie Someone Told You About Yourself

Lesser Known Monsters of the 21st Century is for the adventurous reader—someone willing to walk into a story primed for cultural critique and suddenly come across a plot for murder, or to consider the dangers of sea monsters alongside those posed by 21st century ennui. Each story is spectacularly smart, hybrid in genre, and bold with intention. The monsters here are not only fantastical figures brought to life in hyper-reality but also the strangest parts of the human heart. This book is as moving as it is monumental.

— Lucy Tan, author of What We Were Promised

When a collection is evocative of authors as disparate as Ray Bradbury and Stephanie Vaughn, the only possible unifier can be originality: and that’s what a reader finds in Kim Fu’s Lesser Known Monsters of the 21st Century. The strangest of concepts are tempered by grounded, funny dialogue in these stories, which churn with big ideas and craftily controlled antic energy.

— Naben Ruthnum, author of Find You in the Dark

Kim Fu's Lesser Known Monsters of the 21st Century crushes the coal-dark zeitgeist between its teeth and spits out diamonds, beautiful but razor-sharp. This will be one of the best short story collections of the year.

— Indra Das, author of The Devourers

Precise, elegant, uncanny, and mesmerizing—each story in this collection is a crystalline gem. Kim Fu’s talent is singularly inventive, her every sentence a surprise and an adventure.
— Danya Kukafka, author of Notes on an Execution

Stellar. . . . Fu’s stories crackle with quirky plots, and her characters’ problems and hunger for new possibilities are palpable. This is a winner.
— Publishers Weekly, Starred Review