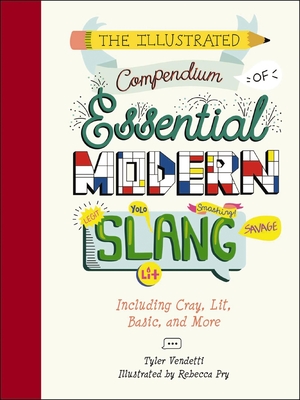 
Special Order—Subject to Availability
The Illustrated Compendium of Essential Modern Slang is an illustrated dictionary of the zaniest jargon, including everything from ankle-biter to zazzy! Complete with definitions, roots, and absurd usage quotes, these 300+ words are sure to make you go, “What does that mean?”

What do your grandmother, your math teacher, your soccer coach, and your booger of a brother all have in common? They all have used slang at some point in their lives! Whether they were getting “jiggy” with it in the ’90s or raving about the “cat’s pajamas” in the ’ 20s, everyone has experienced the joy that comes with these coded exchanges. In this illustrated volume, we’ll take a walk down memory lane, exploring the best, worst, and most lit terms that have ever graced the pages of the English dictionary.

Need an example? We’ve got plenty—300+ to be exact!—including:

Canary (noun): a female singer, the likes of which you might find “chirping” along at the front of the jazzy musical group that your mom hired for your bat mitzvah.
Greaser (noun): a tough guy who is as slick as the hair products that he soaks his fro’ in.
Tubular (adjective): breathtaking, like the wave the dad who said it is probably cruising on.
Bounce (verb): to leave quickly and suddenly before anyone can hear you use the word bounce.
Tea (noun): The hot goss that your friend’s been holding onto, like a literal cup of burning tea she’s waiting to toss in your face when the time is right.

The Illustrated Compendium of Essential Modern Slang is jam-packed with “dope” slang words, their origin stories, hilarious usage quotes, and a pronunciation guide so you can properly enunciate that funny word that no one understands. From millennial jargon to Gen Z lingo, this comprehensive collection of modern slang is sure to make you go cray (in a good way).
Tyler Vendetti is a writer and wannabe dog mom whose work focuses on pop culture, humor, and the trials and tribulations of twentysomething-hood. Author of The Illustrated Compendium of Ugly and Gross English Words, she boasts bylines in xoJane, TIME Online, Cosmopolitan magazine, HelloGiggles, The Penny Hoarder, and Thought Catalog, among others. Formerly of NBCUniversal and Warner Bros., she works as an entertainment assistant in Los Angeles. A comedy enthusiast with a flair for horror, Tyler can be found on Twitter @HeyThereFuture or at her home in Los Angeles, where she’s been hiding behind the couch the whole time.