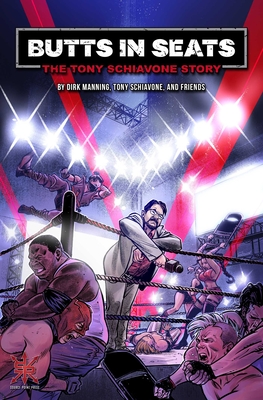 By Dirk Manning, Tony Schiavone (As told by)


Backordered
From teenage wrestling fan to becoming “The Voice of Your Childhood,” famed professional wrestling commentator Tony Schiavone has spent five decades working in the pro wrestling industry... and he’s now sharing his story with the world!

From teenage wrestling fan to becoming “The Voice of Your Childhood,” famed professional wrestling commentator Tony Schiavone has spent five decades working in

the pro wrestling industry... and he’s now sharing his story with the world! This fourteen-chapter graphic novel details observations, anecdotes, and experiences about

Tony’s life in professional wrestling as told by Tony himself and illustrated by over two dozen amazing artists from across the world! From his earliest days with Crockett

Promotions to the rise and fall of WCW, and now his triumphant return with All Elite Wrestling, you can now experience Tony’s life in professional wrestling in a way that’s

never been told–or seen–before!
"Dirk Manning is the writer/creator of comic series such as the supernatural noir Tales of Mr. Rhee and the genre-bending horror anthology Nightmare World. More of Dirk’s comic work includes Buried But Not Dead, Twiztid Haunted High-Ons, (nominated for three Ringo Awards, including Best Humor Comic of 2020) Hope, Butts in Seats: The Tony Schiavone Story, Love Stories (to Die For), and The Adventures of Cthulhu Jr. & Dastardly Dirk. Now predominantly publishing with Source Point Press, Dirk was an early adapter in using crowdfunding to launch pre-sales of his comics and graphic novels, with Dirk’s work having raised over $250,000 and counting in pre-sales on Kickstarter alone.

Dirk is also the author of the inspirational/how-to column turned book series Write or Wrong: A Writer’s Guide to Creating Comics and has contributed several short stories to the RPG game series Clockwork: Dominion for Reliquary Game Studios.

When not at his desk writing, touring on the comic convention circuit, and/or sampling his way across the best ice cream shops in the world, Dirk can be found online at www.DirkManning.com and on most social media platforms as @dirkmanning.

He does not wear a top hat and scarf in real life.
"

The year 2020 marked the fifth decadeTony Schiavonehas announced professional wrestling.A native of the tiny town of Craigsville, Virginia, Tony grew up loving pro wrestling, baseball,and dogs. His sports announcing career began in Staunton,Virginia, at radio station WTON,where he did basketball and football play-by-play and was an afternoon disc jockey. He moved to Greensboro, North Carolina, in 1981 to do baseball play-by-play for the Yankees’ Single A team in the South Atlantic League. There he met Lois Berger. Now, after more than 40 years of marriage, he and Lois have five children, six grandchildren, and two dogs. Tony and Lois residein Marietta, Georgia, where they have lived in the same house for over 30 years. Lovingly known by wrestling fans across the world as “The Voice of Your Childhood,” Tony is currently an Announcer and Senior Producer with All Elite Wrestling and co-host of the podcast What Happened When with Conrad Thompson on the Cumulus Podcast Network,www.whwmonday.com, and www.AdFreeShows.com. He can also be found on Twitter and Instagram under the handle@tonyschiavone24.  A lifelong fan of comics,Butts in Seats: The Tony Schiavone Story is his first foray into thecomic book industry in a professional capacity.