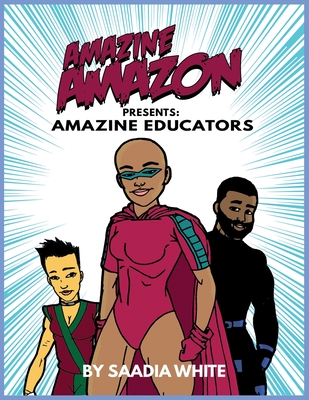 Deaths, Job Loss, Anxiety, and Stress...If ever there was a need for a superhero, now is the time

Amazine Amazon strives to be your super SHERO. She possesses the powers in each one of us that we often don't see. She is that voice in the community that roars loudly for women and young girls who have not found their voice. She is courage. She is Power. She is FEARLESS, but most of all she is a conqueror.

And no place needs her more than I Am Somebody Academy.

Breyon Waller, The Bully
There's always one and Breyon Waller is it. From class clown to disrupter/bully, Breyon knows how to terrorize others and is every teacher's worst Nightmare.
And Anda, The New Kid
No one makes a better victim for Breyon than new student Anda. Being new to the school, she believes that she just needs to take the bullying that Breyon dishes out.
Ms. Bushel, The New Teacher
Breyon is in sheer heaven because not only does he have the new kid to pick on, but he also has a new teacher Let the games begin
Amazine Amazon to the rescue, along with her friends Knowledge and Strengthof

Count on Knowledge to bring wisdom and teach a learning lesson in every problematic situation.

The awesome trio manages to teach some powerful lessons at "I Am Somebody Academy that addresses bullying, biases, and other prejudices.

But this is just the beginning because ....There's always at least ONE and sometimes TWO