Long Exposure: My Life In and Beyond the Copper Country (Paperback) 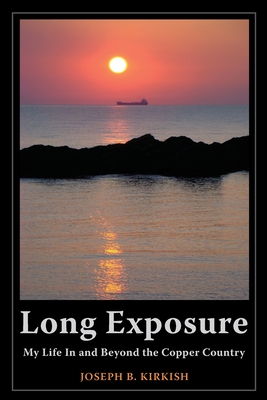 Long Exposure: My Life In and Beyond the Copper Country (Paperback)

Long Exposure is a lively and probing self-portrait by Joe Kirkish, a living legend of Michigan's Copper Country. Renowned as a photographer, a Michigan Tech humanities professor, a pioneering public radio producer and film series organizer, as well as an art critic and local columnist, Kirkish has been an indefatigable cultural force in his hometown of Houghton and throughout the Keweenaw Peninsula.

His memoir spans his childhood years in the 1920s and '30s growing up within an immigrant clan of Lebanese merchants in a mining community, his adventure-filled quest for identity and independence outside the U.P., and his eventual return to his rural roots to ply his prodigious artistic, teaching, and journalistic talents over six decades. Woven into the narrative are fascinating portraits and cameos of the personalities who helped shape his life and work, including visionary educators such as Robert Gard (University of Wisconsin), John Schulze (University of Iowa), and Muggs Lorber (Camp Nebagamon), along with vivid accounts of his encounters with a medley of celebrities ranging from John Kander (Broadway musical composer) to Edward Teller ("father of the H-bomb") to Bill Siemering (creator of NPR's All Things Considered).