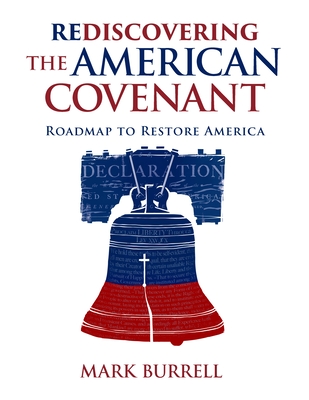 
Coming Soon—Pre-Order Now
America is in decline. What is the cause, and what must be done to re-establish our founding principles?

Nothing in print today clearly answers these questions from a biblical standpoint. Until now.

Mark Burrell's Rediscovering the American Covenant provides fresh light on biblical principles for civil government and the citizenship duty all Christians have in the communities in which they live. These principles are extracted empirically from the Bible, showing how they informed the actions of the founders in 1776, thus establishing our national covenant. The simple, yet critical blueprint they followed is described--the same blueprint needed today to restore America's founding principles.

The author concludes with a call to action for Christians and the church, to rediscover the American covenant and fulfill the citizenship duty we have as Christians.

All the opposing arguments aimed to dimmish America are addressed, some in fresh ways. Given the breadth of the material, full 2-page illustrations are used to set the tone for each chapter. Additional illustrations draw the reader in and help connect concepts to the active citizenship duty Christians have. A 2-page theological monograph is also included, incorporating key governing principles.

The aim of this book is to present a thorough biblical argument for:

1. Active citizenship as a vital part of the Christian faith (including sharing the Gospel).

2. How this duty informed the actions of the founders as they codified and declared our American national covenant.

3. Steps for Christians to re-engage politically, to restore their local community and America to a God honoring nation.

Mark is originally from Pennsylvania and grew up in the Episcopal Church where he accepted Christ as a teenager. He attended Penn State University and met his wife, Charlene, in 1980. They married in 1983 and moved to northeast Pennsylvania a year later where Mark began his career in the private sector. While living there they helped start several independent Bible churches that continue today. In 1987 Mark developed a mentoring relationship with an experienced pastor and spent several years studying Systematic Theology. He began a teaching ministry in the early 1990's covering a variety of topics, and in the late 90's became interested in Biblical aspects of the American founding.