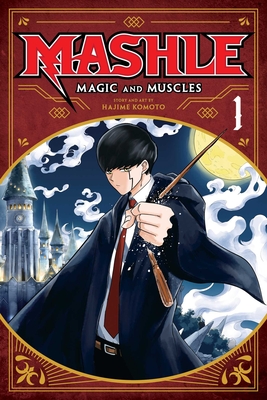 This is book number 1 in the Mashle: Magic and Muscles series.

In the magic realm, magic is everything—everyone can use it, and one’s skill determines their social status. Deep in the forest, oblivious to the ways of the world, lives Mash. Thanks to his daily training, he’s become a fitness god. When Mash is discovered, he has no choice but to enroll in magic school, where he must beat the competition without revealing his secret—he can’t use magic!

Mash just wants to live in peace with his father in the forest. But the only way he’ll ever be accepted in the magic realm is by attending magic school and becoming a Divine Visionary—an exceptional student revered as one the chosen. But without an ounce of magic to his name, Mash will have to punch his way to the top spot.
Hajime Komoto made his manga debut with the hit series Mashle: Magic and Muscles, which began serialization in Weekly Shonen Jump in January 2020.