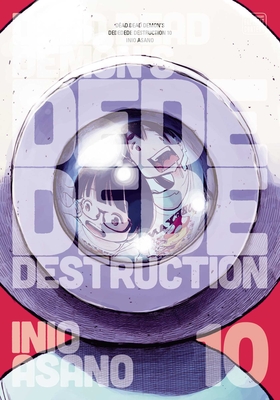 This is book number 10 in the Dead Dead Demon’s Dededede Destruction series.

Three years ago the aliens invaded Tokyo. Nothing was ever the same again. But after a while, even impending doom starts to feel ordinary.

Huge chunks of the mother ship are starting to crash into Tokyo, leveling whole neighborhoods. The Japanese government is ready to nope out of the impending destruction, and the Americans are using the growing panic as an excuse to make their move. What’s worse, the internet is down!

With just days left before the end of humanity, at least the Occult Club is having a pretty good vacation at the beach.
Inio Asano, a bona fide earthling, was born in Ibaraki, Japan, in 1980. In 2001, his short story “Uchu kara Konnichiwa” (Hello from Outer Space) won the first Sunday GX Rookie Prize. Later, GX published his series Subarashii Sekai, available in English from VIZ Media as What a Wonderful World! His other works include Hikari no Machi (City of Light), Nijigahara Holograph and Umibe no Onna no Ko (A Girl on the Shore), as well as solanin and Goodnight Punpun, also available from VIZ Media.