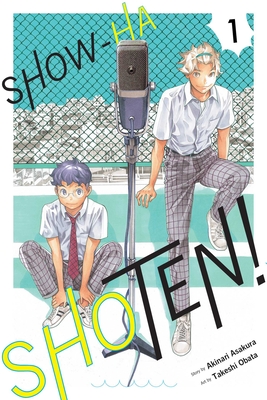 
Coming Soon—Pre-Order Now
A pair of dreamers strive to rise to the top of the comedy world in this story by Akinari Asakura with art by Takeshi Obata (Death Note)!

Ever since he failed to make his crush laugh, shy Azemichi Shijima has secretly been studying the art of comedy. Meanwhile, his classmate Taiyo Higashikata has big dreams of being funny but no follow-through. When the two team up, they just might be able to create a wave of laughter that reaches to the heavens and propels them to the top of the comedy world!

Under a fake name, Shijima has cut his comedy chops sending in funny captions to radio shows. When Higashikata discovers his secret, he ropes Shijima into performing in a comedy duo with him at a school show. The live applause they receive is heady, inspiring Higashikata to ask Shijima to join in an audacious dream—to rise to the top of Japan’s comedy scene by winning major events in both stand-up and sketch comedy!
Takeshi Obata was born in 1969 in Niigata, Japan, and first achieved international recognition as the artist of the wildly popular Shonen Jump title Hikaru no Go, which won the 2003 Tezuka Osamu Cultural Prize: Shinsei "New Hope" Award and the 2000 Shogakukan Manga Award. He went on to illustrate the smash hit Death Note as well as the hugely successful manga Bakuman and All You Need Is Kill.