We Were Soldiers Too: The Second Korean War- The DMZ Conflict (Paperback) 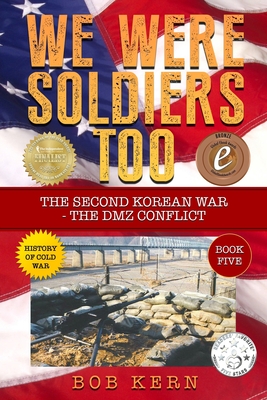 We Were Soldiers Too: The Second Korean War- The DMZ Conflict (Paperback)

If the veterans of The Second Korean War (1966-69) hadn't pushed back and stopped all the assaults, North Korea would have attacked in mass. They would have done it with the Soviet Union's and China's blessing and support. The communist thought the United States was overcommitted to Vietnam (which we were). These veterans kept the border secured and hid the truth of our shortages from them.

Here's what people don't realize- If the communist would have found our border defenses weak, there would likely be no South Korea. Success on the Korean peninsula would have emboldened the Soviets and their desire to spread communism. Europe would have been next.

The problems with North Korea can be traced back to the end of the Korean War. US and ROK soldiers had to follow strict rules against an enemy that ignored the rules. The Armistice Agreement clearly states that neither side can cross the border. The North Koreans did it anyway. They did it daily during The Second Korean War. A patrol comes under fire and takes casualties. Several dead and several wounded friends. The cowardly North Koreans simply ran back across the border. Then it was over. No pursuit. No retaliation. There were never any consequences for their actions.

The United Nations Command would call a Military Armistice Commission meeting. Both sides would travel to the JSA and gather at the "peace" table. Complaints would be made and the North Koreans would deny it. Four to five times a month these meetings were called. North Korea would be accused and they would deny it. It was like a never-ending movie from hell. The storyline changed every day but the ending was always the same. This is exactly why the North Koreans continue to do what they want sixty plus years later. They're never held accountable. There were never any consequences for their actions.