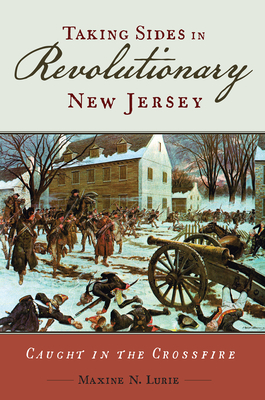 
Not On Our Shelves—Ships in 1-5 Days
The American Revolution in New Jersey lasted eight long years, during which many were caught in the middle of a vicious civil war. Residents living in an active war zone took stands that varied from “Loyalist” to “Patriot” to neutral and/or "trimmer" (those who changed sides for a variety of reasons). Men and women, Blacks and whites, Native Americans, and those from a wide variety of ethnic backgrounds, with different religious affiliations all found themselves in this difficult middle ground. When taking sides, sometimes family was important, sometimes religion, or political principles; the course of the war and location also mattered. Lurie analyzes the difficulties faced by prisoners of war, the refugees produced by the conflict, and those Loyalists who remained, left as exiles, or surprisingly later returned. Their stories are interesting, often dramatic, and include examples of those literally caught in the crossfire. They illustrate the ways in which this was an extremely difficult time and place to live. In the end more of the war was fought in New Jersey than elsewhere, resulting in the highest number of casualties, and a great deal of physical damage. The costs were high no matter what side individuals took. Taking Sides uses numerous brief biographies to illustrate the American Revolution’s complexity; it quotes from documents, pamphlets, diaries, letters, and poetry, a variety of sources to provide insight into the thoughts and reactions of those living through it all. It focuses on people rather than battles and provides perspective for the difficult choices we make in our own times.

Supplemental Instructor Resources for Taking Sides in Revolutionary New Jersey:
Questions (https://d3tto5i5w9ogdd.cloudfront.net/wp-content/uploads/2022/07/19144155/Taking-Sides-Supplementary-Instructor-Resources-Questions.pdf)
Bibliography (https://d3tto5i5w9ogdd.cloudfront.net/wp-content/uploads/2022/07/19144154/Taking-Sides-Supplementary-Instructor-Resources-Bibliography.pdf)
MAXINE N. LURIE is a professor emerita of history at Seton Hall University in South Orange, New Jersey. She is the editor of A New Jersey Anthology and a co-editor of Encyclopedia of New Jersey, Mapping New Jersey: An Evolving Landscape, New Jersey: A History of the Garden State, and Envisioning New Jersey: An Illustrated History of the Garden State, all from Rutgers University Press.
"Lurie’s scholarship demonstrates her unmatched grasp of the American Revolution in New Jersey. Taking Sides in Revolutionary New Jersey contributes to a deeper understanding of the revolutionary era."
— Jonathan Mercantini

"With this volume, Lurie solidifies herself as the leading scholar of Revolutionary New Jersey by uncovering the vital role that people played in creating the 'messy complexity' of the Revolution in New Jersey. Lurie convincingly shows that Americans did not all agree on a path forward in 1776, joining the Patriots, Crown, or remaining neutral for a myriad of complex reasons. Taking Sides deftly exposes the civil war underway in the young state, including the war’s devastating economic toll on the state and its dramatic effect on individual people’s lives."
— James Gigantino