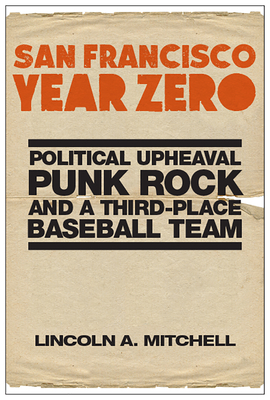 By Lincoln A. Mitchell


Special Order—Subject to Availability
San Francisco is a city of contradictions. It is one of the most socially liberal cities in America, but it also has some of the nation’s worst income inequality. It is a playground for tech millionaires, with an outrageously high cost of living, yet it also supports vibrant alternative and avant-garde scenes. So how did the city get this way?

In San Francisco Year Zero, San Francisco native Lincoln Mitchell traces the roots of the current situation back to 1978, when three key events occurred: the assassination of George Moscone and Harvey Milk occurring fewer than two weeks after the massacre of Peoples Temple members in Jonestown, Guyana, the explosion of the city’s punk rock scene, and a breakthrough season for the San Francisco Giants. Through these three strands, Mitchell explores the rifts between the city’s pro-business and progressive-left politicians, the emergence of Dianne Feinstein as a political powerhouse, the increasing prominence of the city’s LGBT community, punk’s reinvigoration of the Bay Area’s radical cultural politics, and the ways that the Giants helped unify one of the most ethnically and culturally diverse cities in the nation.

Written from a unique insider’s perspective, San Francisco Year Zero deftly weaves together the personal and the political, putting a human face on the social upheavals that transformed a city.

LINCOLN A. MITCHELL is an adjunct associate professor of Political Science at Columbia University, where he also serves as an associate scholar in the Saltzman Institute of War and Peace Studies. He has authored many books on the former Soviet states, democracy, and baseball, including Baseball Goes West: How the Giants and Dodgers Shaped the Major Leagues (2018). He has also written extensively about San Francisco’s history in Instant City, Roads and Kingdoms, Parts Unknown and the New York Observer.

"Lincoln Mitchell presents a new and brilliant understanding of San Francisco, America's most progressive city, by describing and interpreting its culture through the extraordinary prism of politics, baseball, and the punk rock scene in the seventies. The reader learns how and why San Francisco, frequently chided derisively by President Trump and other right wing politicians for our ‘San Francisco values,’ developed those values that eventually become an indelible part of American values everywhere.”
— Art Agnos

"Mitchell's comprehensive portrayal of the zeitgeist of 1978 San Francisco is illuminated by a prism sided by the unlikely trio of baseball, punk, and our city’s political traumas. His writing manifests the passion of a participant with the certainty of a historian. He has perfectly captured that dark uncertain moment when San Francisco was seen in black and white, between the psychedelic era of hippies and the city's reemergence as a diverse cultural Mecca."
— Penelope Houston

"The 1978 Giants were a truly special, exciting and fun team. Mitchell does a wonderful job telling the story of that team, but what makes this book truly compelling is that he shows why baseball and the Giants were so important to the extraordinary period in San Francisco that 1978 was. By doing that, Mitchell provides an indispensable perspective and resource not only for baseball fans, but for anybody who wants to understand how San Francisco got to be the city it is today. Mitchell has woven a tale of politics, murder, cults, punk rock and baseball together to provide an entertaining, powerful, cohesive and holistic picture of San Francisco during the year that changed everything in our city."
— Bob Lurie

"From the perspective of an adolescent growing up in post-hippie San Francisco, Lincoln Mitchell brings a totally new and riveting perspective to every facet of San Francisco in 1978 from Major League Baseball, to the early days of punk rock to the tragic, tumultuous and violent politics. San Francisco Year Zero sheds new light on how the events of that pivotal year shaped politics in San Francisco and the rest of our country for the next four decades and to this day.  And it’s a gentle reminder that it’s still not too late for us to once again chart the progressive political course that was cut short by the political assassinations and messianic violence that rocked San Francisco and America 40 years ago."
— San Francisco Supervisor Aaron Peskin

"The book is both rigorous political science that would be very useful to scholars of urban politics generally and San Francisco more specifically, but is also a highly readable and fun book that gives a deeper perspective into San Francisco in 1978. Mitchell captures both the larger political issues that defined the city then and continue to impact it now as well as the feel of what it meant to be growing up in San Francisco at the time.”
— Kenneth Sherrill

"1978 was a year that shook and reshaped San Francisco just as brutally and profoundly as 1906 had, though the changes it wrought were due to cultural, social and political upheaval instead of shifting tectonic plates. In San Francisco Year Zero, Lincoln Mitchell paints a cinematic and insightful portrait of a year in which such disparate characters as Harvey Milk, Jim Jones, Johnny Rotten, Jello Biafra, Jerry Garcia, Bill Graham, Dianne Feinstein, Penelope Houston, Vida Blue and Jack Clark all left lasting marks on The City By The Bay. If you love San Francisco, urban history, baseball and/or punk rock, this is an essential read."
— Dan Epstein

"This freewheeling narrative captures the chaos of 1978 well, with a decade’s worth of highs and lows packed into one memorable calendar year....San Francisco Year Zero is still a rollicking look at a very unique year in a very unique city."
— Foreword Reviews

"Dead Kennedys in the West: The Politicized Punks of 1970s San Francisco - The New Punk Generation Made the Hippies Look Past Their Prime" excerpt from San Francisco Year Zero
https://lithub.com/dead-kennedys-in-the-west-the-politicized-punks-of-1970s-san-francisco/
— Literary Hub

"The Year That Was: 1978 and the Making of Contemporary San Francisco"
https://www.commonwealthclub.org/events/archive/podcast/year-was-1978-and-making-contemporary-san-francisco
— The Commonwealth Club Podcast

"What does baseball have to do with punk rock and politics?" by Victoria Ivie
http://pcccourier.com/main-story/what-does-baseball-have-to-do-with-punk-rock-and-politics.html
— PCC Courier

"Lincoln A. Mitchell writes fluidly and skillfully about his old home with wistful nostalgia. A reconciliation of the good times with the worst times are difficult but nevertheless compelling. A+ narrative."
— San Francisco Book Review

"All in all it is a very interesting book. Well worth purchasing for not only punk rock fans but also for people interested in the history of San Francisco."
— Punk Globe

"What lessons can the US learn from the British election results?" interview with Lincoln Mitchell

"1978: the year that changed San Francisco forever" by Lincoln A. Mitchell
https://www.theguardian.com/us-news/2020/jan/05/san-francisco-1978-changed-city
— The Guardian

"For those who aren’t as politically inclined, Mitchell covers the key cultural components of San Francisco in 1978. Whether it is cheering on a mediocre Giants team at an awful stadium, a growing concern for fellow San Franciscans who had left for Guyana with Jim Jones, or the evolving music scene, Mitchell paints a vivid picture of the city in 1978. I learned a lot from this book and came away with a much better view of the complexities of San Francisco. If you are looking for an interesting read, I would suggest picking up a copy."
— Start Spreading the News

"Essential reading for newcomers and old-timers alike."
— The Frisc

"Lincoln Mitchell on His Love of Baseball and Politics"
https://www.storiedsf.com/episodes/s3e5-part-1-lincoln-mitchell-on-his-love-of-baseball-and-politics
— Storied SF

"Mitchell writes with clarity, effortlessly switching between the main parts of the narrative while simultaneously bringing in other peripheral observations and facts. I am sure San Fransicans will reveal in this, while those who have never ventured to the city should find the events of 1978 captivating."
— Scanner Zine

"Mitchell charts the tensions in San Francisco's politics between the struggle for progressive policies—led by the emergent political force of the LGBT community and influenced by the radicalism of punk rock—and the pro-business policies that were ultimately implemented. His recounting of the Giants 1978 season, which unified the city, is meticulous. This book is a good starting point to understand today's San Francisco. Recommended."
— Choice

"San Francisco Year Zero makes a welcome contribution to the urban history of this left-coast city and will be an engaging read for those interested in the city’s political, musical, and baseball past."
— Journal of Urban Affairs

"Harvey Milk's murder is a stark reminder of the persistence of police brutality" by Lincoln Mitchell
https://www.theguardian.com/us-news/2020/nov/27/harvey-milk-assassination-police-brutality
— The Guardian

"The author’s enthusiasm for [baseball] and the [Giants] come through, both in the minute detail in which he reports statistics that only a hardcore fan will understand, but in making us care about a baseball season in which the Giants finish, after all, only in third place. Here, the mix of the author’s own memories of going to games as an 11-year-old with his scholarly reflections on the team’s 1978 season pay off."
— Urban History

"1978 was a harrowing year of tragedy and political upheaval in San Francisco, but there were also some bright spots — including a burgeoning punk rock scene and a Giants team that spent much of the summer atop the NL West — and Mitchell ties it all together in this compulsively readable tome."
— Los Angeles Daily News

28 all-star books about California baseball including the Giants, Dodgers, A’s and more: "1978 was a harrowing year of tragedy and political upheaval in San Francisco, but there were also some bright spots — including a burgeoning punk rock scene and a Giants team that spent much of the summer atop the NL West — and Mitchell ties it all together in this compulsively readable tome."
— San Jose Mercury News