The Politics of International Marriage in Japan (Politics of Marriage and Gender: Global Issues in Local Contexts) (Paperback) 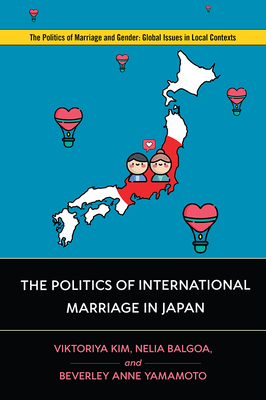 The Politics of International Marriage in Japan (Politics of Marriage and Gender: Global Issues in Local Contexts) (Paperback)


Special Order—Subject to Availability
This book provides an in-depth exploration and analysis of marriages between Japanese nationals and migrants from three broad ethnic/cultural groups - spouses from the former Soviet Union countries, the Philippines, and Western countries. It reveals how the marriage migrants navigate the intricacies and trajectories of their marriages with Japanese people while living in Japan. Seen from the lens of ‘gendered geographies of power’, the book explores how state-level politics and policies towards marriage, migration, and gender affect the personal power politics in operation within the relationships of these international couples. Overall, the book discusses how ethnic identity intersects with gender in the negotiation of spaces and power relations between and amongst couples; and the role states and structural inequalities play in these processes, resulting in a reconfiguration of our notions of what international marriages are and how powerful gender and the state are in understanding the power relations in these unions.

NELIA G. BALGOA is a professor in the Department of English and Culture and Arts Studies Center of the Mindanao State University-Iligan Institute of Technology, Mindanao, Philippines.

"A welcome addition to the growing body of scholarship focused on gender and marriage migration in Japan. Shedding light on various aspects of cross-border relationships, cross-cultural parenting and family formation, The Politics of International Marriage in Japan vibrantly illuminates individual engagement in the dynamics and differences of gender, capital, culture, and nation that are embedded in marriage and migration."
— Kumiko Nemoto

"A novel and valuable contribution to the growing field of research on international marriages. Bringing together three bodies of research on different nationality groups of migrant spouses, with key themes in the study of marriage-related migration, and the Japanese framework of uchi/soto, this book provides a distinctive and ambitious analysis of the diversity of international marriages in Japan."
— Katharine Charsley

"This is a useful book for any discussion of contemporary marriage practices in Japan. I would use this book as a secondary source in my Japanese literature classes. It provides important background information as well as nice case studies that I could use as points of comparison with the fiction I assign for my students to read."
— Anne Sokolsky