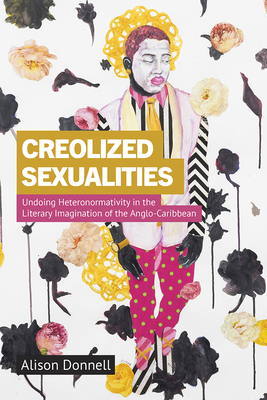 
Not On Our Shelves—Ships in 1-5 Days
Creolized Sexualities: Undoing Heteronormativity in the Literary Imagination of the Anglo-Caribbean draws attention to a wide, and surprising, range of writings that craft inclusive and pluralizing representations of sexual possibilities within the Caribbean imagination. Reading across an eclectic range of writings from V.S. Naipaul to Marlon James, Shani Mootoo to Junot Diaz, Andrew Salkey to Thomas Glave, Curdella Forbes to Colin Robinson, this bold work of literary criticism brings into view fictional worlds where Caribbeanness and queerness correspond and reconcile. Through inspired close readings Donnell gathers evidence and argument for the Caribbean as an exemplary creolized ecology of fluid possibilities that can illuminate the prospect of a non-heteronormalizing future. Indeed, Creolized Sexualities hows how writers have long rendered sexual plasticity, indeterminacy, and pluralism as an integral part of Caribbeanness and as one of the most compelling if unacknowledged ways of resisting the disciplining regimes of colonial and neocolonial power.
ALISON DONNELL is a professor of modern literatures in English and head of the School of Literature, Creative Writing, and Drama at the University of East Anglia in Norwich, England.
"Creolized Sexualities's meticulous scholarship thrusts Caribbean studies well into the future, simultaneously—and generously—clearing ever more space for the emerging field of Caribbean queer studies. Donnell's trenchant prose and insights join forces to powerfully illuminate rooms and possibilities previously unconsidered."
— Thomas Glave

"This will be a singular new book in the field of queer Caribbean literary studies for offering a more recent analysis of literature that has heretofore not been considered together. It echoes a larger claim about the queer nature of Caribbean sexualities rooted in the creolized specificity of the region."
— Lyndon K. Gill