The Politics of Genocide: From the Genocide Convention to the Responsibility to Protect (Genocide, Political Violence, Human Rights ) (Paperback) 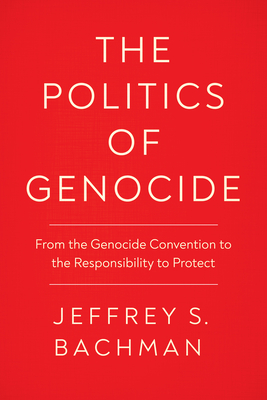 The Politics of Genocide: From the Genocide Convention to the Responsibility to Protect (Genocide, Political Violence, Human Rights ) (Paperback)


Not On Our Shelves—Ships in 1-5 Days
Beginning with the negotiations that concluded with the unanimous adoption of the United Nations Convention on the Prevention and Punishment of the Crime of Genocide on December 9, 1948, and extending to the present day, the United States, Soviet Union/Russia, China, United Kingdom, and France have put forth great effort to ensure that they will not be implicated in the crime of genocide. If this were to fail, they have also ensured that holding any of them accountable for genocide will be practically impossible. By situating genocide prevention in a system of territorial jurisdiction; by excluding protection for political groups and acts constituting cultural genocide from the Genocide Convention; by controlling when genocide is meaningfully named at the Security Council; and by pointing the responsibility to protect in directions away from any of the P-5, they have achieved what can only be described as practical impunity for genocide. The Politics of Genocide is the first book to explicitly demonstrate how the permanent member nations have exploited the Genocide Convention to isolate themselves from the reach of the law, marking them as "outlaw states."
JEFFREY S. BACHMAN is a senior professorial lecturer in human rights at the American University School of International Service in Washington, DC. He is the author of The United States and Genocide: (Re)Defining the Relationship and editor of Cultural Genocide: Law, Politics, and Global Manifestations.

"In The Politics of Genocide, Jeffrey S. Bachman conducts an unsparing analysis of the United Nations (UN) Genocide Convention’s formulation in 1947-48 and subsequent selective application by the permanent members of the UN Security Council. Decrying the orchestrated 'culture of impunity for genocide,' this book is a necessary corrective to the view that the Genocide Convention has humanized world politics."
— Dirk Moses

A rigorous and revisionist study of how framings of genocide, and applications of the relevant international law, granted effective impunity to the world's most powerful state actors -- and still do. Bachman's book is readable and accessible. It serves as an excellent complement and counterweight to standard treatments of this vital subject.
— Adam Jones