Americans and the Holocaust: A Reader (Paperback) 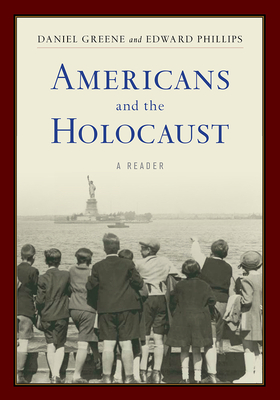 Americans and the Holocaust: A Reader (Paperback)


In Stock—Click for Locations
What did the American people and the US government know about the threats posed by Nazi Germany? What could have been done to stop the rise of Nazism in Germany and its assault on Europe’s Jews?

Americans and the Holocaust explores these enduring questions by gathering together more than one hundred primary sources that reveal how Americans debated their responsibility to respond to Nazism. Drawing on groundbreaking research conducted for the United States Holocaust Memorial Museum’s Americans and the Holocaust exhibition, these carefully chosen sources help readers understand how Americans’ responses to Nazism were shaped by the challenging circumstances in the United States during the 1920s, 1930s, and 1940s, including profound economic crisis, fear of communism, pervasive antisemitism and racism, and widespread isolationism.

Collecting newspaper and magazine articles, popular culture materials, and government records, Americans and the Holocaust is a valuable resource for students and historians seeking to shed light on this dark era in world history.

EDWARD J. PHILLIPS joined the United States Holocaust Memorial Museum in 1994 and directed its exhibitions program from 2008 until his retirement in 2018. He contributed to nearly fifty exhibition projects, including Americans and the Holocaust, the basis for this reader.
This remarkable book shatters the myth that Americans lacked information about the dangers of Nazism. These diverse, historical sources from multiple voices across the United States leave us with troubling questions about the national will to respond to discrimination, war, and genocide.
— Ken Burns, Lynn Novick and Sarah Botstein

This book is an important and exceptionally useful resource for the classroom. Any teacher or student who wants to get a feel for the prevailing sentiments in America during the prelude to World War II and during the war itself will be immensely aided by this important collection of voices. If you want to know what did people know and when did they know it, this collection will help provide the answer.
— Deborah E. Lipstadt, Ph.D.

This wide-ranging, representative, and deeply absorbing selection of American commentary on the plight of Europe’s Jews during the 1930s and 1940s both informs about the past and prompts reflection on the present. Readers will come face to face with the best and the worst of our country’s reflexes, both then and now.
— Peter Hayes

Kudos to Daniel Greene and Edward Phillips for producing this searing collection of contemporary news stories, government reports, and other documents contradicting the common belief that the American government and people had little access to information about the Holocaust as it unfolded. With its haunting parallels to the deep strains in our society today, this is an essential read.
— Lynne Olson

This expertly curated array of primary sources -- newspaper clippings, State Department memos, photographs, and more -- explores the persistent question: What did Americans know about the Holocaust? The answer -- an astonishing amount! -- deepens our understanding of the past and challenges what we think we know about our own times.
— Doris Bergen