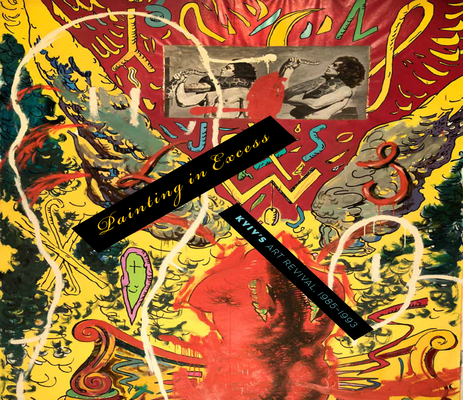 
Not On Our Shelves—Ships in 1-5 Days
The upheavals of glasnost and perestroika followed by the collapse of the Soviet Union remarkably transformed the art scene in Kyiv, launching Ukrainian contemporary art as a global phenomenon. The previously calm waters of the culturally provincial capital of the Ukrainian Soviet Republic became radically stirred with new and daring art made publicly visible for the first time since the avant-garde period of the early twentieth century. As artists were freed from the dictates of the fading Communist ideology and the constraints of late socialist realism, an explosion of styles emerged, creating an effect of baroque excess. This exhibition catalogue traces and documents the diverse artistic manifestations of these transitional and exhilarating years in Kyiv while providing some historical artworks for context. Published in partnership with the Zimmerli Museum.
Asia Bazdyrieva is an art historian whose practice revolves around writing, research, and education both independently and within cultural institutions in Ukraine and internationally. Her main expertise is the project of Soviet modernity and its ideological implications in public spaces, architecture, and art. Bazdyrieva holds master's degrees in art history from the City University of New York and in analytical chemistry from the Kyiv National University. She was a Fulbright scholar in 2015-17, an Edmund S. Muskie fellow in 2017, and the Digital Earth fellow in 2018-19. In 2018, she was a postgraduate in the New Normal program at Strelka Institute for Media, Architecture and Design in Moscow.

Alisa Lozhkina is an independent Ukrainian curator, art historian, and critic currently based in the San Francisco Bay Area. From 2010 to 2016 she was the editor in chief of the major Ukrainian art magazine Art Ukraine. From 2013 to 2016 she served as a deputy director of Mystetskyi Arsenal in Kyiv. Alisa Lozhkina has organized seven large-scale international exhibitions of contemporary art, including Permanent Revolution: Ukrainian Art Now at the Ludwig Museum, Budapest, which was nominated for Global Fine Art Awards (New York) as one of the best museum exhibitions of postwar and contemporary art in 2018. Additionally, Lozhkina is the author of Point Zero: The Newest History of Ukrainian Contemporary Art (co-authored with Oleksandr Soloviov, 2010) and Permanent Revolution: Art in Ukraine, the 20th to the Early 21st Century, which was published in Ukrainian, French, and, most recently, in English. Alisa is currently an ABD in comparative history at Central European University (Vienna-Budapest), where she is writing her dissertation on the interconnection of art and revolutions in recent Ukrainian history.

Olena Martynyuk is an art historian with an interest in art theory and philosophy. Her research focuses on Ukrainian and Russian art from the late twentieth century to the present. She received her PhD in art history from Rutgers University in January 2018. Currently, she is a Petro Jacyk Postdoctoral Research Fellow in Ukrainian Studies in the Harriman Institute of Columbia University, where she is doing research and teaching classes on Ukrainian and Russian art history from the Russian Empire period through the avant-garde and up to the present day. She was a recipient of the Louise Bevier Dissertation Fellowship and Andrew Mellon Summer Fellowship, taught art history classes at Rutgers University and CUNY College of Staten Island, and organized exhibitions at the Zimmerli Art Museum, the Ukrainian Museum, and the Ukrainian Institute of America in New York City.

Oleksandr Soloviov is a prominent Ukrainian art critic born in Volgograd and based in Kyiv, a participant and a chronicler of the events of Ukrainian contemporary art since its origins in the late 1980s. He was a curator at the Pinchuk Art Centre in Kyiv (2006-13) and oversaw such major exhibition projects as First Collection (2003), Farewell Arms! (2004) and Reality Check (2005), based on Viktor Pinchuk's collection before the center was established. Currently Soloviov works as a curator (since 2010) and a deputy director (since 2013) of Mystetsky Arsenal in Kyiv. Among his curatorial projects there are Independent: New Art of the New Country, 1991-2011 (2011), Oleksander Hnylytskyj: Reality of the Illusion (2017), Flashback: Ukrainian Media-art of the 1990s (2018), and Oleg Holosiy: Non-Stop Painting (2019). He served as a curator of the Ukrainian Pavilion at the Venice Biennale in 2003, 2007, and 2013.