The Oxygen Mask Rule: To Save Your Child, First, Block the Government from Putting You in Jail: Criminal Aspects of Civil Child Abuse and Ne (Paperback) 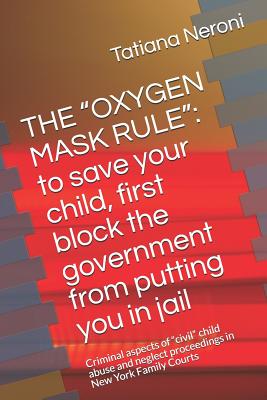 The Oxygen Mask Rule: To Save Your Child, First, Block the Government from Putting You in Jail: Criminal Aspects of Civil Child Abuse and Ne (Paperback)


Not On Our Shelves—Ships in 1-5 Days
(This book cannot be returned.)
This edition is the first textbook/reference book of a planned series of books covering, step-by-step, various aspects of the law of child neglect and abuse in Family Courts of the State of New York, from the point of view of defense of parents in such proceedings. The first book of the series provides an in-depth coverage and analysis of the law, government practices and court cases in New York governing "civil" child neglect and abuse proceedings and the flow of information involved in a child protective case, from a single point: the risk, for the parent, of the "civil" child abuse and neglect investigation and court proceedings to grow into a criminal case or result in putting the parent in jail through "civil" proceedings.Understanding that, at all times, the "civil" CPS case is a building tool for a criminal case may prevent the parent from making major errors at the beginning of a CPS investigation which may cause not only separation from the child, but a criminal conviction.Defense of parents in child abuse and neglect proceedings is not taught in law schools and is not tested on bar exams. Governing statutes are often so long and confusing and require an enormous amount of time to connect the dots between various seemingly unconnected statutes and cases. Parents and busy attorneys working on such cases often do not have time to do this kind of research on their own. Connecting the dots is what this book does. The book contains texts of a large number of "civil," but criminal statutes used in child neglect or abuse cases in order to help build a criminal case against parents, with commentary and analysis of constitutional problems in such statutes; trial advocacy techniques to overcome pitfalls in such "civil" proceedings that may lead to a criminal conviction, or to incarceration through a "civil" Family Court-related proceeding; a case study of several cases illustrating how agreements with social services, law enforcements and courts may build a path to jail for a parent; and, some overview of conflicts of interests judges and criminal prosecutors may or do have in Family Court child neglect or abuse cases.The book is the result of the author's 19 years of research and many years of litigation experience in criminal, family and federal courts in civil rights litigation against CPS.The book contains constitutional research of various issues arising from the criminal nature of "civil" child neglect and abuse proceedings in New York Family Courts, including issues of compelled speech and compelled thought disclosure of the parents in various "evaluations," court orders of "cooperation" with social services or "supervision" by social services, and at Family Court Article 10 hearings, relying on what is considered in the U.S. as mandatory legal authorities on constitutional issues - texts of the U.S. Constitution and precedents of the U.S. Supreme Court.For readers' convenience, an extensive table of legal authorities referenced in the book is included.