Cooking With Columbo: Suppers With The Shambling Sleuth: Episode guides and recipes from the kitchen of Peter Falk and many of his Columbo c (Paperback) 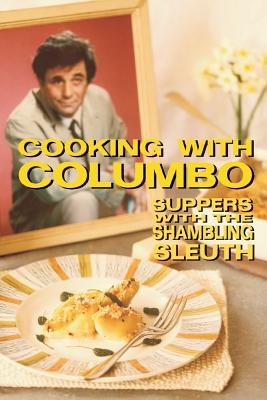 Cooking With Columbo: Suppers With The Shambling Sleuth: Episode guides and recipes from the kitchen of Peter Falk and many of his Columbo c (Paperback)


Not On Our Shelves—Ships in 1-5 Days
(This book cannot be returned.)
Grab your rumpled raincoat, chomp down on a cigar, and rattle those pots and pans It's time to braise, broil, chop, chill, grill, roast, and poach with world's most beloved sleuth Columbo super-fan, Jenny Hammerton, offers an episode by episode guide to the food and drink so prominently featured throughout the greatest television detective series ever made. She guides you through cherry-picked, episode-specific recipes, and suggests ways to make your Columbo party, the talk of the town. Beyond the expected hard-boiled eggs and chili, you'll find many other ideas for delicious dinners that are sure to entice every armchair detective.Jenny is the proprietress of the wildly popular, Silver Screen Suppers blog site. She has plundered her archive (of more than 7000 movie star recipes) for the favorites of The Lieutenant himself, Peter Falk, and those of his many stellar co-stars. Rustle up a big batch of Johnny Cash's perfectly-seasoned Chili for a screening of Swan Song (with lots of chums). Serve Dick Van Dyke's delectable Breast of Chicken Florentine to your sweetie, while watching Negative Reaction. Pamper yourself with Janet Leigh's heavenly Cheese Souffl , an indulgent dinner for one, with Forgotten Lady to entertain you."Food is an ever-present and enjoyable ingredient of the show. I can only commend author Jenny for her passion for the subject matter and her devotion to the Columbo cause. What you have here, is a fantastic collection of recipes suitable for every occasion."The Columbophile, internationally renowned Columbo expert.
Jenny Hammerton learned to cook from the glittering screen stars of yesteryear. Many years ago, in a dusty, stamp and postcard collectables shop, she stumbled upon a vintage celebrity cookbook. This chance find would change her life. The manic collecting began, and her celebrity recipe archive now numbers over 7000. She probably won't live long enough to try all these dishes, but she's going to give it a good go. Movie star recipe successes (and failures) have been documented on the Silver Screen Suppers website for over a decade. A graduate of the UEA Masters in Film Archiving course, Jenny has worked in film archives for over twenty years. She adores her job and is currently working with the British Movietone cinema newsreel collection. Jenny lives in Muswell Hill, North London with her DVD box set of Columbo. Website - silverscreensuppers.com Facebook - Silver Screen Suppers Twitter - @silverscreensup Instagram - @silverscreensuppers