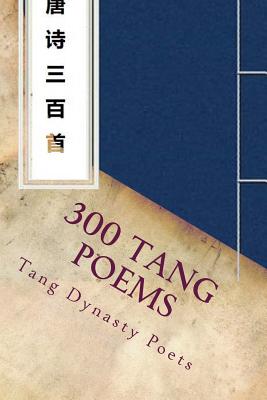 
Not On Our Shelves—Ships in 1-5 Days
(This book cannot be returned.)
The Three Hundred Tang Poemsis an anthology of poems from the Chinese Tang dynasty, 618-907, first compiled around 1763 by Sun Zhu, 1722-1778, the Qing Dynasty scholar, also known as Hengtang Tuishi. Various later editions also exist. All editions contain over 300 poems: in this case, three hundred means not exactly 300 but refers to an estimative quantification, the ten, twenty, or more extra poems represent a sort of a good luck bonus, analogous to the baker's dozen in the West. Even more, the number 300 was a classic number for a poetry collection due to the influence of the Classic of Poetry, which was generally known as The Three Hundred Poems. The poets of the Tang shi include a number of authors ranging from the well-known and famous to obscure or anonymous poets, and even include at least one emperor. The poet with the most pieces included in this collection is Du Fu, with thirty-nine. Li Bo is a close runner-up, with thirty-four. Wang Wei has twenty-nine poems included in the anthology and Li Shangyin has twenty-four. Meng Haoran has fifteen, Wei Yingwu twelve, Liu Changqing eleven, and Du Mu ten. After that, each of the other poets' included pieces number in the single digits, however, some of these poets are quite important, such as Liu Zongyuan or Bai Juyi. Some important poets, such as Li He, are not represented at all.