The Man Who Invented Motion Pictures: A True Tale of Obsession, Murder, and the Movies (Hardcover) 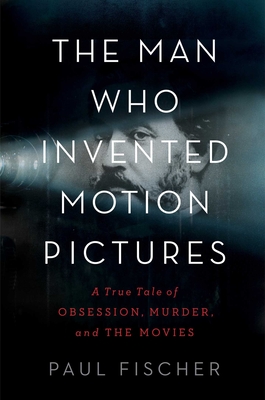 The Man Who Invented Motion Pictures: A True Tale of Obsession, Murder, and the Movies (Hardcover)


In Stock—Click for Locations
A “spellbinding, thriller-like” (Shelf Awareness) history about the invention of the motion picture and the mysterious, forgotten man behind it—detailing his life, work, disappearance, and legacy.

The year is 1888, and Louis Le Prince is finally testing his “taker” or “receiver” device for his family on the front lawn. The device is meant to capture ten to twelve images per second on film, creating a reproduction of reality that can be replayed as many times as desired. In an otherwise separate and detached world, occurrences from one end of the globe could now be viewable with only a few days delay on the other side of the world. No human experience—from the most mundane to the most momentous—would need to be lost to history.

In 1890, Le Prince was granted patents in four countries ahead of other inventors who were rushing to accomplish the same task. But just weeks before unveiling his invention to the world, he mysteriously disappeared and was never seen or heard from again. Three and half years later, Thomas Edison, Le Prince’s rival, made the device public, claiming to have invented it himself. And the man who had dedicated his life to preserving memories was himself lost to history—until now.

“Lively…Mr. Fischer documents with the rigor of a historian and the flair of a true-crime writer.”
—Wall Street Journal

“Tantalizing…Fischer helps us see how revelatory motion pictures were at the time…[a] reminder of how inventiveness can breed fresh hope along with innovation.”
—Washington Post

“An absorbing tale, elegantly written and brilliantly told, with the plot twists and surprise ending worthy of a Hollywood blockbuster.”
—The Irish Times

“With a spellbinding, thriller-like presentation supported by painstaking research, Fischer puts forth evidence to try to unravel the mystery of Le Prince's life and death. Deftly organized facts, coupled with the technical minutiae of filmmaking, reveal fascinating details of Le Prince's life and the challenges faced in his work, while also exposing the mysterious circumstances surrounding his disappearance. Fischer's stellar, suspenseful narrative is a work of art unto itself that finally gives Le Prince—and the impact of his often overlooked, cut-short creative genius—his due.“
—Shelf Awareness

"Vivid character sketches, lyrical descriptions of the art and science of moviemaking, and a dramatic plot twist make this a must-read."
—Publishers Weekly, starred review

"A fascinating, informative, skillfully articulated narrative of one of the forgotten figures in cinematic history."
—Kirkus Reviews, starred review

"Paul Fischer’s detailed and dramatic study of the life of the French inventor Louis Le Prince is a story of elusive images and unexplained death…The Man Who Invented Motion Pictures is an impressive piece of historical research [and] wonderful storytelling."
—Times Literary Supplement

“Probing a still-unsolved mystery at the heart of the world’s most popular art form, the result is both absorbing, forensic and jaw-dropping."
—Total Film

“An absorbing account of the life and mysterious death of Louis Le Prince…Fischer brings sharp forensic skills and a cool head to a narrative that has become hijacked by wild conspiracy theories.”
—Sunday Times

“An exhaustively researched look into not only the Frenchman’s life, but the history of photography and the attempts to move from visual still lifes to actual motion.”
—The Daily Beast

"If Edison is the father of moving film, Louis is its godfather—the original mastermind behind the industry. In his investigative history The Man Who Invented Motion Pictures, author and filmmaker Paul Fischer rekindles Louis's legacy and speculates about his disappearance."
—The Washington Free Beacon

"The Man Who Invented Motion Pictures is partly a fascinating history, partly a surprisingly twisted whodunit, and entirely an insightful story of the very human intrigue and interests behind one of the most influential technologies of our time. Take a bow, Paul Fischer."
—Deborah Blum, Pulitzer-Prize winning author of The Poison Squad and the Poisoner's Handbook

"The Man Who Invented Motion Pictures sheds surprising new light on the brutal 19th century inventor wars that led to something we now take for granted: our ability to watch people on celluloid act out stories that move us, make us laugh, make us cry, and change our lives. Paul Fischer brings the forgotten father of the modern movie, Louis Le Prince, to life in big-screen detail, and delivers a gripping tale that holds its own against any Hitchockian thriller."
—Jennifer Keishin Armstrong, New York Times bestselling author of Seinfeldia and When Women Invented Television

"Most people believe Thomas Edison 'invented' the motion picture. But filmmaker and author Paul Fisher here tells the fascinating and largely-forgotten true story of Louis Le Prince, the actual inventor (with patents to prove it) of this world-changing technology. In 1890, just as Le Prince was scheduled to astound the world with the first public viewing of his astonishing invention, he mysteriously disappeared. In Fisher’s meticulous and entertaining history, we meet Le Prince’s rival inventors, with all their travails and triumphs — including a dark and ruthless Edison. Not only does Fisher make the case that Le Prince is the real father of the motion picture, he has also persuasively solved the 130-year-old mystery of Le Prince’s disappearance and death. A terrific book!"
—Jill Jones, author of Empires of Light and Eiffel's Tower