It's Hard to Be Hip Over Thirty: And Other Tragedies of Married Life (Judith Viorst's Decades) (Hardcover) 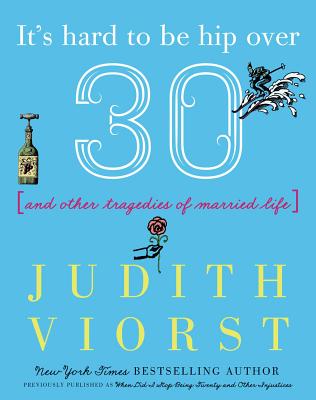 It's Hard to Be Hip Over Thirty: And Other Tragedies of Married Life (Judith Viorst's Decades) (Hardcover)


On Our Shelves Now at:
Bringing together some of the best of Judith Viorst’s witty and perceptive poetry—and featuring the illustrations from the original edition by John Alcorn—Viorst explores the all-too-true ironies and absurdities of being a woman in the modern world.

Whether she’s finding herself or finding a sitter, contemplating her sex life as she rubs hormone night cream on her face, or wrestling with the contradiction of falling in love with a man her parents would actually approve of, Viorst transforms the familiar events of daily life into poems that make you laugh with recognition.

Here is the young single girl leaving her parents’ home for life in the big city (“No I do not believe in free love/And yes I will be home for Sunday dinners”). Here is the aspiring bohemian with an expensive liberal arts education, getting coffee and taking dictation, “Hoping that someday someone will be impressed/With all I know.” Here is that married woman, coping with motherhood (“The tricycles are cluttering my foyer/The Pop Tart crumbs are sprinkled on my soul”) and fantasy affairs (“I could imagine cryptic conversations, clandestine martinis...and me explaining that long kisses clog my sinuses”) and all-too-real family reunions (“Four aunts in pain taking pills/One cousin in analysis taking notes”). And here she is at mid-life, wondering whether a woman who used to wear a “Ban the Bomb” button can find happiness being a person with a set of fondue forks, a fish poacher, and a wok.

Every step of the way, It’s Hard to be Hip Over Thirty and Other Tragedies of Married Life demonstrates once and for all that no one understands American women coming of age like Judith Viorst.

*It’s Hard to be Hip Over Thirty and Other Tragedies of Married Life is a reissue of the previous collection originally titled When Did I Stop Being Twenty and Other Injustices.
Judith Viorst is the author of the beloved Alexander and the Terrible, Horrible, No Good, Very Bad Day, which has sold some four million copies; the Lulu books, including Lulu and the Brontosaurus; the New York Times bestseller Necessary Losses; four musicals; and poetry for children and young adults. Her most recent books of poetry include What Are You Glad About? What Are You Mad About? and Nearing Ninety.