The Courage to Be Happy: Discover the Power of Positive Psychology and Choose Happiness Every Day (Hardcover) 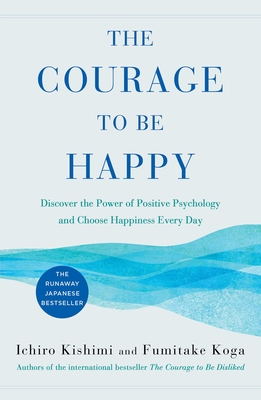 The Courage to Be Happy: Discover the Power of Positive Psychology and Choose Happiness Every Day (Hardcover)


Not On Our Shelves—Ships in 1-5 Days
In this follow-up to the international phenomenon The Courage to Be Disliked, discover how to reconnect with your true self, experience true happiness, and live the life you want.

What if one simple choice could unlock your destiny?

Already a major Japanese bestseller, this eye-opening and accessible follow-up to the “compelling” (Marc Andreessen) international phenomenon The Courage to be Disliked shares the powerful teachings of Alfred Adler, one of the giants of 19th-century psychology, through another illuminating dialogue between the philosopher and the young man.

Three years after their first conversation, the young man finds himself disillusioned and disappointed, convinced Adler’s teachings only work in theory, not in practice. But through further discussions between the philosopher and the young man, they deepen their own understandings of Adler’s powerful teachings, and learn the tools needed to apply Adler’s teachings to the chaos of everyday life.

To be read on its own or as a companion to the bestselling first book, The Courage to Be Happy reveals a bold new way of thinking and living, empowering you to let go of the shackles of past trauma and the expectations of others, and to use this freedom to create the life you truly desire.

Plainspoken yet profoundly moving, reading The Courage to Be Happy will light a torch with the power to illuminate your life and brighten the world as we know it. Discover the courage to choose happiness.
Ichiro Kishimi was born in Kyoto, where he currently resides. He writes and lectures on Adlerian psychology and provides counseling for youths in psychiatric clinics as a certified counselor and consultant for the Japanese Society of Adlerian Psychology. He is the translator, into Japanese, of selected writings by Alfred Adler—The Science of Living and Problems of Neurosis—and he is the author of Introduction to Adlerian Psychology, in addition to numerous other books.

Fumitake Koga is an award-winning professional writer and author. He has released numerous bestselling works of business-related and general non-fiction. He encountered Adlerian psychology in his late twenties and was deeply affected by its conventional wisdom–defying ideas. Thereafter, Koga made numerous visits to Ichiro Kishimi in Kyoto, gleaned from him the essence of Adlerian psychology, and took down the notes for the classical “dialogue format” method of Greek philosophy that is used in this book.
Praise for The Courage to Be Disliked

"Marie Kondo, but for your brain."
— Hello Giggles

"A nuanced discussion of a complex theory, with moments of real philosophical insight.... [It's] refreshing and useful to read a philosophy that goes against many contemporary orthodoxies. More than a century since Adler founded his school of psychology, there’s still insight and novelty in his theories."
— Quartzy

“[The Courage to be Disliked guides] readers toward achieving happiness and lasting change… For those seeking a discourse that helps explain who they are in the world, Kishimi and Koga provide an illuminating conversation.”
— Library Journal