Bullets and Opium: Real-Life Stories of China After the Tiananmen Square Massacre (Hardcover) 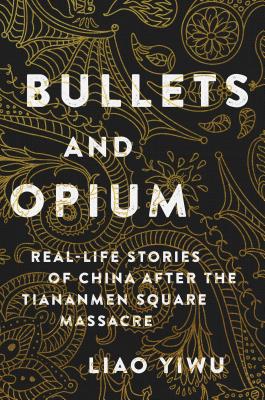 Bullets and Opium: Real-Life Stories of China After the Tiananmen Square Massacre (Hardcover)


Special Order—Subject to Availability
“Moving…a memorable series of portraits of the working-class people who defended Tiananmen Square." —The New York Review of Books

“A series of harrowing, unforgettable tales...Had [Liao Yiwu] not fled the country in 2011, they may never have emerged. An indispensable historical document.” —Kirkus Reviews (starred review)

From the award-winning poet, dissident, and “one of the most original and remarkable Chinese writers of our time” (Philip Gourevitch) comes a raw, evocative, and unforgettable look at the Tiananmen Square massacre through the eyes of those who were there.

For over seven years, Liao Yiwu—a master of contemporary Chinese literature, imprisoned and persecuted as a counter-revolutionary until he fled the country in 2011—secretly interviewed survivors of the devastating 1989 Tiananmen Square massacre. Tortured, imprisoned, and forced into silence and the margins of Chinese society for thirty years, their harrowing stories are now finally revealed in this gripping and masterful work of investigative journalism.
Liao Yiwu is a writer, musician, and poet from Sichaun, China. He is the author of The Corpse Walker, God Is Red, and For a Song and a Hundred Songs, a memoir of the four years he spent in prison after the Tiananmen Square Massacre. His work has been published in Germany, France, Italy, Spain, Poland, the Netherlands, the Czech Republic, and Sweden. He has received numerous awards, including the prestigious 2012 Peace Prize awarded by the German Book Trade and the Disturbing the Peace Award given by the Václav Havel Library Foundation. Liao escaped from China in July 2011 and currently lives in Berlin, Germany.
“Moving… a memorable series of portraits of the working-class people who defended Tiananmen Square."
— New York Review of Books