CEO Excellence: The Six Mindsets That Distinguish the Best Leaders from the Rest (Hardcover) 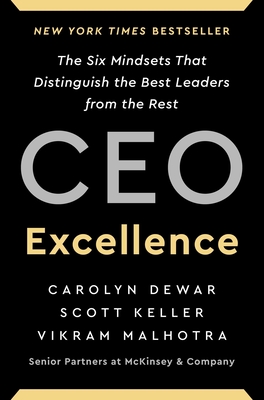 CEO Excellence: The Six Mindsets That Distinguish the Best Leaders from the Rest (Hardcover)

From the world’s most influential management consulting firm, McKinsey & Company, this is an insight-packed, revelatory look at how the best CEOs do their jobs based on extensive interviews with today’s most successful corporate leaders—including chiefs at Netflix, JPMorgan Chase, General Motors, and Sony.

Being a CEO at any of the world’s largest companies is among the most challenging roles in business. Billions, and even trillions, are at stake—and the fates of tens of thousands of employees often hang in the balance. Yet, even when “can’t miss” high-achievers win the top job, very few excel. Thirty percent of Fortune 500 CEOs last fewer than three years, and two out of five new CEOs are perceived to be failing within eighteen months.

For those who shoulder the burden of being the one on whom everyone counts, a manual for excellence is sorely needed.

What came out of those frank, no-holds-barred conversations is a rich array of mindsets and actions that deliver outsized performance. Compelling, practical, and unprecedented in scope, CEO Excellence is a treasure trove of wisdom from today’s most elite business leaders.
Carolyn Dewar is a Senior Partner at McKinsey & Company. She has published over thirty articles in the Harvard Business Review and the McKinsey Quarterly and is a frequent keynote speaker.

Scott Keller is a Senior Partner at McKinsey & Company. He is the author of six books, including Beyond Performance: How Great Organizations Create Ultimate Competitive Advantage.

Vikram (Vik) Malhotra is a Senior Partner at McKinsey & Company where he has worked since 1986. He has served on McKinsey’s Board of Directors and as McKinsey’s Managing Partner of the Americas.
New York Times Bestseller

“Breaks it all down…a master class in leadership…knowing the six mindsets of the most visionary businesses could mean the difference between sinking and swimming for business leaders.”
—Business Insider

“Interviews CEOs (refreshingly, not just the usual suspects), finds out what makes them tick, and formulates a set of maxims and observations…A satisfying handbook for future moguls.”
—Kirkus Reviews

“Remarkable…Any smart CEO looking to not just survive but thrive would do well to read and heed this book’s insights.”
—David Rubenstein, co-founder and co-executive chairman of The Carlyle Group and New York Times bestselling author of How to Lead

“Pulls back the curtain on how some of the world’s greatest business leaders have achieved success…Valuable lessons.”

—Stephen A. Schwarzman, Chairman, CEO, and cofounder of Blackstone