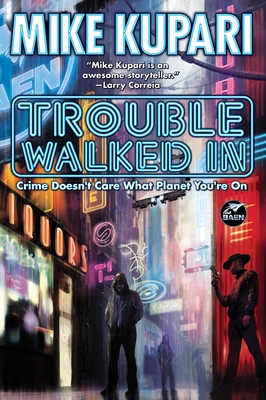 
Not On Our Shelves—Ships in 1-5 Days
EASY RAWLINS CROSSED WITH DIRTY HARRY ON A FAR-FLUNG SPACE COLONY!

A search for a missing woman exposes a conspiracy that could threaten an entire planet.

Cassandra Blake, an employee for the Ascension Planetary Holdings Group—the largest and most powerful corporation in Nova Columbia—has gone missing. And her sister wants to know why. When questions need answering on Nova Columbia, Detective Ezekiel “Easy” Novak is the man folks turn to. He gets results—one way or another.

But what begins as a routine missing person case quickly turns into something much bigger and more sinister, with implications that could affect the entire planet. It seems Cassandra wasn’t just investigating her employer. She had uncovered a secret effort to excavate and exploit an ancient alien artifact known only as The Seraph.

Soon, Easy finds himself trying to unravel a conspiracy that may implicate not only Ascension, but the cultlike Cosmic Ontological Foundation—and the highest echelons of the Terran Confederation itself.

Praise for Trouble Walked In:
"Anyone who loves everything from The Big Sleep to Blade Runner, or needs a fix while waiting for the next installment in The Dresden Files or Monster Hunters International, will feel right at home between these pages."—Upstream Reviews

"Kupari is a skilled tradesman, deftly creating characters that are easy to get invested in and easy to care for. You will cheer at their successes and commiserate with them in their failures, for they feel oh so real despite living years and parsecs away from us this year.."—Warped Factor

Praise for Mike Kupari:
“After co-writing Dead Six and Swords of Exodus with Larry Correia, Kupari makes his solo debut with this space opera that is bound to attract fans of Mike Shepherd’s Kris Longknife series or Elizabeth Moon’s Vatta’s War books. An excellent choice for both teen and adult sf readers.” —Library Journal on Her Brother's Keeper

“A big, sweeping space adventure, with heroic characters you care about. Mike Kupari is an awesome storyteller.”—Larry Correia on Sins of Her Father
Mike Kupari is the author of debut science fiction novel Her Brother's Keeper, as well as coauthor, with Larry Correia, of the best-selling Dead Six military adventure series including Dead Six, Swords of Exodus, and Alliance of Shadows. He grew up in Michigan’s Upper Peninsula and enlisted at the age of seventeen. Kupari recently returned from his second active duty overseas with the U.S. Air Force, where he was an explosive ordnance disposal technician. He also served six years in the Army National Guard. Kupari has worked as a security contractor with several firms, did a tour in Southwest Asia with a private military company, and is an NRA-certified firearms instructor.