No Game for Knights (Hardcover) 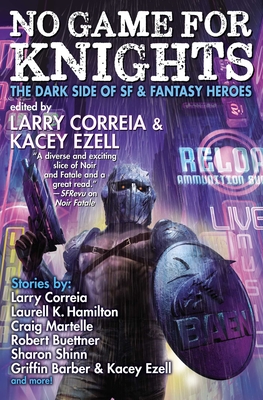 No Game for Knights (Hardcover)


Not On Our Shelves—Ships in 1-5 Days
NEW STORIES OF SCIENCE FICTION AND FANTASY WITH A HARDBOILED NOIR TWIST BY BEST-SELLING AUTHORS LARRY CORREIA, LAURELL K. HAMILTON, AND MORE!

“Knights had no meaning in this game. It wasn't a game for knights.” – Raymond Chandler

In a world of criminals, thugs, con artists, cheats, and swindlers, there must be a man to stand against the powers of darkness and corruption. A man not afraid to walk the mean streets—whether they be those of 1930s Los Angeles, an ancient fantasy realm, or some far-flung planet of a future star empire. He is a man who knows that a “good man” is not always a “nice guy.” But when the chips are down, he understands that a hero does the right thing, even if it means losing everything.

He’s a hard man, sure. But an honorable one. He’s a truth-seeker, a score-evener.

He is Sam Spade. He is Philip Marlowe. He is Rick Deckard. He is Harry Dresden.

He is all these men and more.

Now, join Larry Correia and Kacey Ezell as they present all-new stories of fantasy and science fiction with a hardboiled detective bent by today's top authors.

Grab the bottle of Scotch from your bottom desk drawer. Light a cigarette. Tilt your fedora back on your head. But don’t forget to watch your back. This is No Game for Knights.

Praise for No Game for Knights:

About Noir Fatale, edited by Correia and Ezell:

“Marvelous is a good word to describe all of the stories in the book. . . . Noir Fatale is a book that will charm both noir fans, and general science fiction and fantasy readers. Correia and Ezell have created a captivating mix of stories.”—The Galveston County Daily News

“[A] wonderfully diverse collection of stories from a broad range of authors and it delivers in spades . . . It is a diverse and exciting slice of Noir and Fatale and a great read.”—SFRevu

About Larry Correia and the Monster Hunter International series:

“[E]verything I like in fantasy: intense action scenes, evil in horrifying array, good struggling against the darkness, and most of all people—gorgeously flawed human beings faced with horrible moral choices that force them to question and change and grow.”—Jim Butcher

“[A] no-holds-barred all-out page turner that is part science fiction, part horror, and an absolute blast to read.”—Bookreporter.com

About the work of Kacey Ezell:

“Gritty, dark and damp. Much like the war itself.” —Michael Z. Williamson, best-selling author of A Long Time Until Now

“A lot of good scifi writers write war, but sometimes forget that it is fought by actual people, and even in the midst of war, you don't stop being people while you fight. If you want a good read that dares you to think about what it is like to go to war when you can't hide behind the masks you learn to wear, check it out.” —John T. Mainer
Larry Correia is the creator of the Wall Street Journal and New York Times best-selling Monster Hunter International series, with first entry Monster Hunter International; as well as urban fantasy hardboiled adventure saga The Grimnoir Chronicles, with first entry Hard Magic; and epic fantasy series The Saga of the Forgotten Warrior, with first entry Son of the Black Sword. He is an avid gun user and advocate who shot on a competitive level for many years. Before becoming a full-time writer, he was a military contract accountant, and a small business accountant and manager. Correia lives in Utah with his wife and family.

Kacey Ezell is an active-duty USAF helicopter pilot who also writes sci-fi/fantasy/alt history/horror fiction. Her first novel was a Dragon Award finalist in 2018, and her stories have been featured in Baen’s Year’s Best Military and Adventure Science Fiction compilation in 2017 and 2018. In 2018, her story “Family Over Blood” won the 2018 Year’s Best Military and Adventure Science Fiction Reader’s Choice Award. She writes for Baen and Chris Kennedy Publishing.

Griffin Barber spent his youth in four different countries, learning three languages, and burning all his bridges. Finally settled in Northern California with a day job as a police officer in a major metropolitan department, he lives the good life with his lovely wife, crazy-smart daughter, needy dog, and indifferent cat.  He is the author, with Eric Flint, of 1636: Mission to the Mughals and 1637: The Peacock Throne.

A Webster Award winner and three-time Dragon Award finalist, Chris Kennedy is a Science Fiction/Fantasy author, speaker, and small-press publisher who has written over 30 books and published more than 200 others. He lives in Coinjock, North Carolina, with his wife, and is the holder of a doctorate in educational leadership and master’s degrees in both business and public administration.

Christopher Ruocchio is the author of The Sun Eater, a space opera fantasy series, as well as a former assistant editor at Baen Books, where he has edited several anthologies. He is a graduate of North Carolina State University, where he studied English Rhetoric and the Classics. Christopher has been writing since he was eight and sold his first novel, Empire of Silence, at twenty-two. To date, his books have been published in five languages.

Christopher lives in Raleigh, North Carolina with his wife, Jenna.