The Eyes of the Dragon: A Novel (Mass Market) 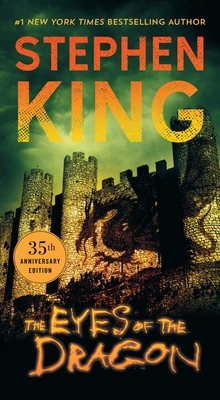 The Eyes of the Dragon: A Novel (Mass Market)


Not On Our Shelves—Ships in 1-5 Days
“It is just not possible to stop turning the pages” (The Washington Post) of this bestselling classic tale—an epic fantasy as only #1 New York Times bestselling author Stephen King could envision it.

Once, in a kingdom called Delain, there was a king with two sons…

​Thus begins one of the most unique tales that master storyteller Stephen King has ever written—a sprawling fantasy of dark magic and the struggle for absolute power that utterly transforms the destinies of two brothers born into royalty. Through this enthralling masterpiece of mythical adventure, intrigue, and terror, you will thrill to this unforgettable narrative filled with relentless, wicked enchantment, and the most terrible of secrets…
Stephen King is the author of more than sixty books, all of them worldwide bestsellers. His recent work includes Fairy Tale, Billy Summers, If It Bleeds, The Institute, Elevation, The Outsider, Sleeping Beauties (cowritten with his son Owen King), and the Bill Hodges trilogy: End of Watch, Finders Keepers, and Mr. Mercedes (an Edgar Award winner for Best Novel and a television series streaming on Peacock). His novel 11/22/63 was named a top ten book of 2011 by The New York Times Book Review and won the Los Angeles Times Book Prize for Mystery/Thriller. His epic works The Dark Tower, It, Pet Sematary, Doctor Sleep, and Firestarter are the basis for major motion pictures, with It now the highest-grossing horror film of all time. He is the recipient of the 2020 Audio Publishers Association Lifetime Achievement Award, the 2018 PEN America Literary Service Award, the 2014 National Medal of Arts, and the 2003 National Book Foundation Medal for Distinguished Contribution to American Letters. He lives in Bangor, Maine, with his wife, novelist Tabitha King.
“Compelling . . . [King's] most powerful storytelling." — The Atlanta Journal-Constitution

“The sorcery of Stephen King . . . expertly seductive . . . it is just not possible to stop turning the pages.” —The Washington Post Book World